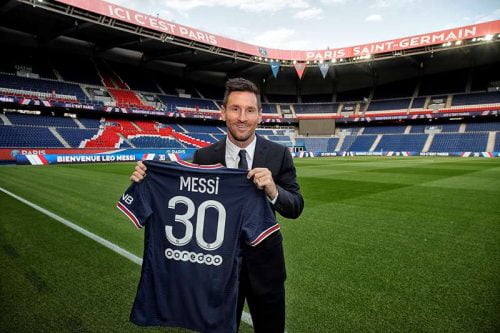 Paris Saint-Germain forward and Argentine international, Lionel Messi has become the first player in the world to get fan tokens.

In a statement on its website on Wednesday, the French club said Messi’s transfer included a payment in cryptocurrency fan tokens.

The statement read, “In a world-first for such a high-profile signing, Leo Messi received a large number of ‘$PSG Fan Tokens’.

“Token implementation comes as a great illustration of the way the Club is constantly finding ways to increase and diversify its revenue streams to continue developing as a global brand.

“In 2018, Paris Saint-Germain made a pioneering step into the world of blockchain, becoming the first sports franchise to partner with Socios.com. Since then, Paris Saint-Germain and Socios.com have been working side by side to capitalize on this new and unique way to connect the Club with the Fans, and the best is yet to come. For millions of PSG supporters around the world, Fan Tokens have become a creative way to engage with the Rouge & Bleu.”

“Paris Saint-Germain fans have been very active on Socios.com, taking advantage of a host of engagement opportunities on the app. Through $PSG Fan Tokens, fans worldwide get the opportunity to choose a motivational message on the wall of the dressing room before a key game, the Goal of the Season, or the winners of the club’s end-of-season awards. Fans have also experienced unique, personal video calls from first-team stars via the platform, and even more exciting activations are planned for the coming weeks and months.

“The hype surrounding the latest signings in the club’s busy summer transfer window created a huge surge of interest in $PSG Fan Tokens, with trading volumes exceeding $1.2 billion in the days preceding the move.”