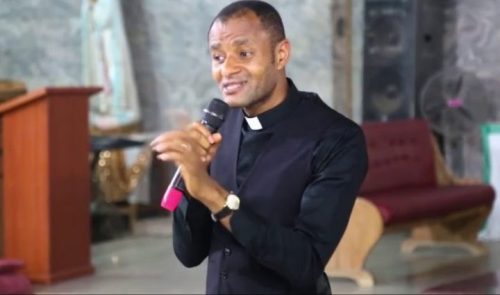 He made this statement following the death of gospel artiste, Osinachi Nwachukwu who was said to have suffered from domestic violence from her husband, leading to her death.

Speaking to his congregation recently, Fr Oluoma said although the Catholic church doesn’t believe in divorce, it believes in separation from bed and board and also nullification of a marriage.

”If your husband is beating you, he will kill you one day. He will kill you one day. Police may arrest him, after a while they leave him. He may even leave long and remarry and if he remarries, another wicked woman, the children you suffered for, will be maltreating the children. Runaway. There is nothing pious, nothing spiritual about staying in a marrriage and you are dying gradually.

If he doesn’t kill you instantly, he will damage your vital organs and you will die at the age of 60 or fifty something. They will think it is sickness that killed you. Run away I have told you.