Bukayo Saka Explains True Meaning Of His Name, Reveals Who Named Him In Strong Revelation 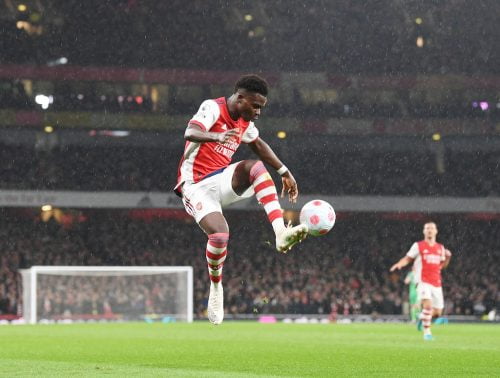 Arsenal youngster Saka has explained that it was his grandma who named him Bukayo which is a Nigerian name claiming that the woman was happy when he was born. Bukayo Saka was born in the United Kingdom to Nigerian parents and there were even efforts by the Nigerian football chiefs for the Arsenal star to play for the Super Eagles.

Nigerian Football Federation (NFF) president Amaju Pinnick traveled to the UK to meet the parents of Bukayo Saka to convince their son to play for the three-times African champions.

But despite all the efforts, Bukayo Saka refused to play for Nigeria and instead chose the country of his birth and even represented England at the EURO 2020 losing the final on penalties. According to the report on GOAL, the England international explained that his grandmother named him Bukayo because she wanted him to bring joy to the family.

Bukayo Saka’s reaction about his name

“My grandma gave it to me because of its meaning.

“It means ‘God has added joy to my life.’ She wanted me to add joy to the family, so she named me that and every time she called me, that’s probably what I meant to her.”

When did Bukayo Saka join Arsenal?

Bukayo Saka has been playing for Arsenal first team since 2018 and the 20-year-old has so far played 89 games for the Gunners netting 15 goals.