The disease, which was previously identified as septic rush or skin disease, has left her with skin which keeps peeling off. 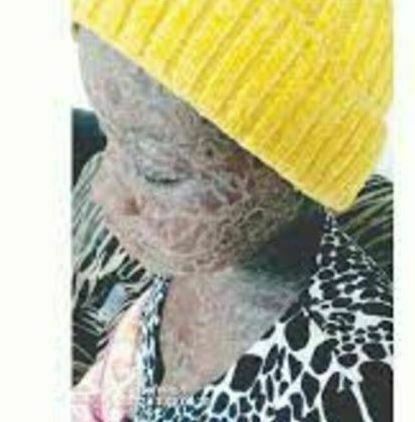 A 17-year-old Zimbabwean girl from Rusape, is going through hell after she developed a rare skin disease which started as a blister but has now spread all over her body.

According to her family, it is caused by an ‘invisible snake’ which licks her body.

H-Metro reported that Nomsa Mundende’s disease, which was previously identified as septic rush or skin disease, has left her with a skin which keeps peeling off, much to the shock of her parents.

Sharing her health challenges with the publication, she said;

“I am in pain and my body is not responding to medical treatment as my parents have taken me to local clinics, general and private hospitals several times.

“I am now disturbed mentally because I’m not healing.

“It started as a blister before spreading all over my body.

“It’s now troubling me since my parents took me to various spiritual healers who told us that I am being tormented by a snake.

“Sometimes, I dream of being attacked by a snake in a bush.

“The same snake appears in my dreams a number of times and I keep wrestling with it.

“Various prophets have told the same story to my parents but without mentioning the owner of the snake.

“I have received different muteuro but my situation is not changing.”

She also revealed that she has no friends as no one wants to be around her. Nomsa added;

“I am now lonely and my studies are also under threat.

“I hope one day I will be well. I am kindly appealing for any assistance that can cure me.

“My parents cannot afford to approach people who claim that they can heal my situation.”

Also commenting on her daughter’s ailment, Nomsa’s father, Tongesai Mudende stated that he is convinced his daughter is being tormented by a snake.

“Various spiritual healers have refused to tell me the trouble causer.

“I am greatly pained.

“I even tried to seek medical treatment but she is not responding medication.