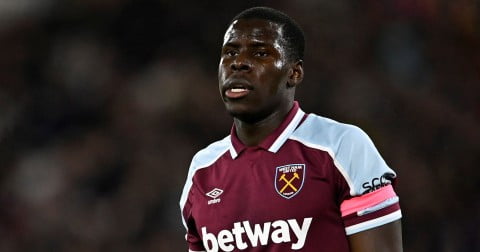 West Ham/France footballer, Kurt Zouma has lost his sponsorship deal with Adidas, just hours after he was fined £250,000 by West Ham for abusing his cats.

A video obtained by The Sun  on Tuesday, February 8, shows Zouma, 27, dropping the cat from chest-height, and kicking it as it lands. He then chases it around the living room while cursing at the cat, and at one point he threw a pair of shoes at the cat, before slapping it in the face.

Animal care agency, RSPCA has taken his two cats following the outrage over the video and now Adidas has now ended his boot deal.

An RSPCA spokesperson said: “The two cats are now in RSPCA care. Our priority is and has always been the well-being of these cats.

“They’ve been taken for a check-up at a vets and then will remain in our care while the investigation continues.

“We’re grateful to everyone who expressed their concern for these cats. We were dealing with this issue before the video went viral online and are leading the investigation.

“We continue to investigate so we cannot comment further at this time.”

A statement by Adidas read: “We have concluded our investigation and can confirm Kurt Zouma is no longer an adidas contracted athlete.”

West Ham said the club “is supporting the RSPCA investigation” and that Zouma has “willingly complied with the steps taken in the initial stage of the process, including delivering his family’s two cats to the RSPCA for assessment”.

The Premier League club added in their own statement: “West Ham United can confirm that Kurt Zouma has been fined the maximum amount possible following his actions in the video that circulated. The player has immediately accepted the fine, which will be donated to animal welfare charities.

“West Ham United would like to reiterate our condemnation of Kurt’s actions and make it clear that the matter continues to be handled with the utmost seriousness. However, we believe it is now important to allow the RSPCA to conduct their investigation in a fair and thorough manner, and will be making no further comment at this stage.”

West Ham’s wellness partner, Vitality, has also suspended its sponsorship of the club with immediate effect.

“We were very distressed by the video we have seen of Kurt Zouma. At Vitality, we condemn animal cruelty and violence of any kind,” a statement read.

“We are hugely disappointed by the judgement subsequently shown by the club in response to this incident. As such, we are suspending our sponsorship of West Ham United with immediate effect. We will now be further engaging with the club to understand what actions they will be taking to address the situation.”