A desperate Tanzanian lady has taken to the streets in search of a husband, saying age is no longer on her side. 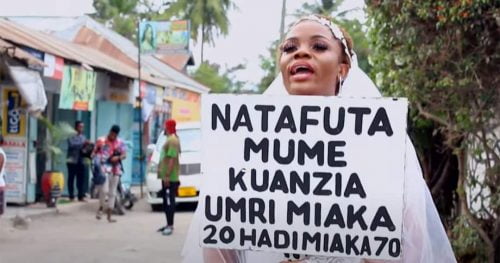 In a video circulated online, the woman was seen carrying a placard in Buza, Dar es Salaam indicating the type of man she is looking for.

“I am looking for a husband aged between 20 and 70”, the placard read.

Speaking to a Tanzanian journalist, the woman said she will pay her dowry and claimed she is still a virgin.

“I even have the wedding rings with me. I will pay the dowry and even buy the suit for the man who will step forward. I am Christian but have no qualms converting to Islam as long as the man is respectful and God-fearing”, she said. she claimed that she bought the wedding dress for KSh 142,000.

According to her, she was prompted to take the bold step as time is running out for her to get married.

“I am getting old and need a man”, she said.

Asked where she got the courage to do it, she said:

“I have not broken the law hence, I have courage.”
The lady further stated that she does not care what others think of her.

“This is a personal decision and no one can judge me”, she said.

She further asserted that she has money and that she is just looking for a man who will love her.

“I have money, I don’t want to stress a man”, she stated.
The lady disclosed that Wednesday 15th September, 2021 was her fourth day in the streets looking for a partner.

“I have met many men who want to meet me in the guest house but I turned them down”, she said.
She now plans on moving around different areas of Dar es Salaam to find a husband.