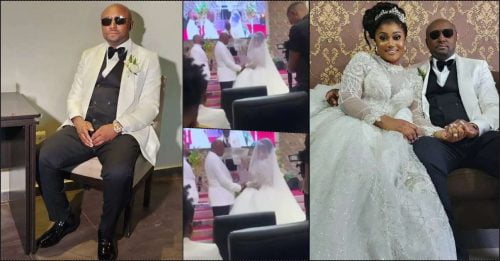 Famous logistic manager, Isreal DMW, drops the singlehood status as his beloved wife, Sheila David, says her vows to him at their white wedding.

Isreal was joined in holy matrimony to his wife in Benin City amongst the company of his boss, Davido, his baby mama Chioma Rowland, and the entire 30BG crew.

A video making rounds on social media captured the romantic atmosphere where the couple said their vows to one another.

Sheila who could not get enough of the groom referred to him as her husband multiple times before the event.

A post shared by Under The Sun Where Everything Unravels (@things_dey_occur)