A student of the St. Monica College who prefers to remain anonymous has reached out to Zionfelix to expose the Anglican Priest who was captured in a viral video kissing female students on the lips.

The Anglican Priest went viral after a video surfaced on social media that captured him kissing students as a way of commending them for a good deed.

Earlier, a Twitter user named Silas revealed the true identity of the Anglican Priest. According to Silas, the priest goes by the name Ricky Larbi and is one of the priests in the St. Monica College.

In a recent update, a student of the school has reached out to Zionfelix to expose the priest for how he sometimes treats female students in the school as well as some of his profane untterances.

According to the student, the “Father” kissed a few of her colleagues at church service on Sunday, and a video of it was shared on their different social media channels.

She went on to describe how the Priest treats the female students with vulgar phrases like “shua” and “medi wo.” These are sexual statements that clearly revealed his intention to sleep with the ladies should the chance arrive.

The student also added that some of the female students are being forced by the priest to sit on his laps and whoever refuses gets punished.

See the screenshot below: 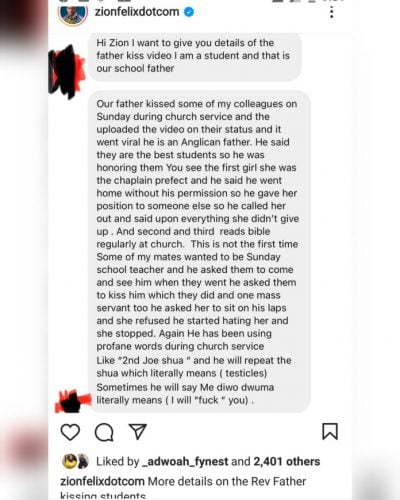