The Minister of Labour and Employment, Chris Ngige, on Wednesday, berated the National Association of Nigeria Students (NANS) for staging a protest in his ministry over a strike embarked upon by the Academic Staff Union of Universities (ASUU). 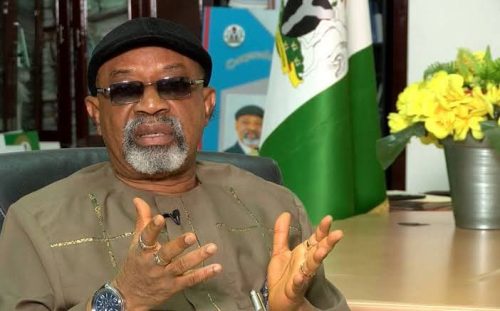 Ngige described as “inflammatory and misguided”, the comment credited to the student’s body, which threatened to mobilise students to disrupt the activities of the ministry.

Why We Are Not Joining ASUU Strike — Ojukwu University
Pantami keeps mum over ASUU’s stand against his professorship
The students’ body led by its president, Sunday Asefon, had on Monday demonstrated against a pronouncement made by ASUU leaders that they would embark on a one-month strike to press home their demands from the Federal Government.

But Ngige, while reacting to the demonstration in a statement issued by the ministry’s spokesman, Charles Akpan, said the students lack enough information about his commitment to return stability and excellence back to the universities.

The statement partly read, “Indeed his (Ngige) untiring efforts to enthrone a peaceful national industrial milieu, it is imperative we make salient clarifications on the misinformation and misrepresentation on what has become an unending ritual of strike by ASUU vis a vis the ongoing action.

“The reason is to carry along, all genuinely concerned Nigerian students and parents on the commitment of the Buhari administration to resolve age-long challenges besetting the university system as well as apprise them of the steps being taken by the Minister of Labour and Employment in discharging his responsibilities.”

The minister argued that his ministry is not the employer of members of academic staff in any tertiary institution, saying it only serves as the conciliator of disputes between workers and their employers in various ministries.

He said, “First is to note that university lecturers who operate under a union of workers, the ASUU affiliated to the NLC are employees of the universities being overseen on behalf of the Federal Government by the National Universities Commission, a parastatal under the Ministry of Education.

He further stated, “It is thus completely false that the Minister of Labour and Employment hasn’t paid attention to monitoring the implementation of the December 2020 ASUU/ FG Memorandum of Action.

“Though not assigned to it in the MOA, the Minister of Labour and Employment has been monitoring the implementation of the MOA to ensure compliance.”

Ngige also criticised ASUU for not notifying the ministry before it declared a strike, saying the Ministry never received any official communication from the union on any impending strike as required by Labour Laws.

He added, “Further enquiries at the Ministry’s Labour Desk in the Federal Ministry of Education in case ASUU chose to drop the notice there also revealed none. Ask the reason ASUU is in regular breach of this laid down procedure for embarking on strike.”