The Academic Staff Union of Universities (ASUU) has said it will go on nationwide strike if the government fails to meet its demands between now and February 13. 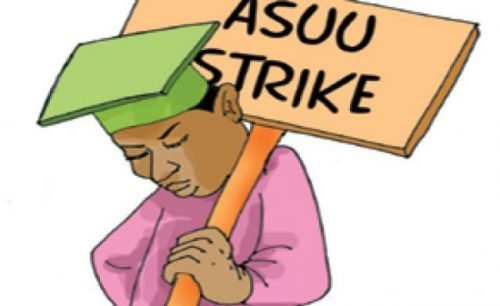 A communique made available to newsmen on Monday evening revealed that the academic union and the National Executive Council will meet at the University of Lagos on February 12 and 13.

ASUU is demanding that the Federal Government implement the Memorandum of Action it signed with the union last year.

According to the Chairman of the Kwara State University branch, Malete, Dr Salau Sheu, the federal government is shying away from its responsibility by asking ministers to oversee the implementation of the MoA.

The academician faulted President Muhammadu Buhari for assigning two ministers to oversee the implementation of the Memorandum of Action signed last year with ASUU.

“ASUU is having its National Executive Council meeting at the University of Lagos on February 12 and 13.

“If nothing is done by the government between now and then, the lecturers may go on strike.”

ASUU had earlier declared Monday, February 7, 2022, as a lecture-free day.

This is as the academic union maintained its energy towards embarking on another industrial action following its lingering loggerhead with the federal government.

The Monday lecture-free day Naija News understands is to help the varsity association to sensitize members of the public on its disagreement with the government.