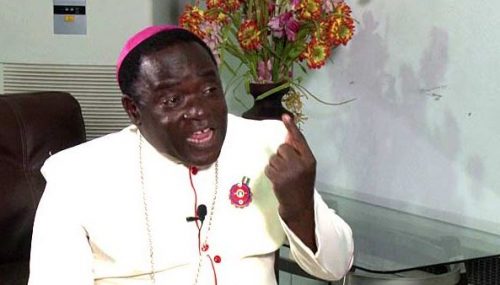 The Bishop of the Catholic Diocese of Sokoto, Matthew Kukah has called out President Muhammadu Buhari, saying he’s leaving Nigerians far more worse than he met them in 2015.
Kukah spoke during his 2022 Christmas Message released on Sunday and titled, ‘Nigeria: Let Us Turn A New Page.’
He noted that President Buhari failed to keep to his lofty promises made to Nigerians while campaigning in 2014 ahead of the 2015 presidential election.
He expressed happiness that Buhari’s health has improved in the last seven-and-a-half years but wished millions of Nigerians enjoy a fraction of Buhari’s enhanced health through access to better healthcare services in the country.
He wrote: “Mr President Sir, a merry Christmas to you and your entire family. I speak for myself and Nigerians when I say, we thank God that He mercifully restored you to good health. We know that you are healthier now than you were before. We can see it in the spring in your steps, the thousands of miles you have continued to cover as you travel abroad. May God give you more years of good health.
“However, I also wish that millions of our citizens had a chance to enjoy just a fraction of your own health by a measurable improvement in the quality of health care in our country. It is sad that despite your lofty promises, you are leaving us far more vulnerable than when you came, that the corruption we thought would be fought has become a leviathan and sadly, a consequence of a government marked by nepotism.
“In my Christmas Message last year, I pointed out the fact that you had breached the Constitution by your failure to honour and adhere to the federal character provisions of our Constitution. The evidence is all before us all.”
He, however, commended the President for the efforts made in the area of infrastructure and in seeking to end malfeasance in the electoral processes.
Kukah also berated Buhari for failing to persuade the All Progressives Congress (APC) against fielding the Muslim-Muslim presidential ticket.
He added: “Am I to believe that you knew and could do nothing about the Muslim-Muslim ticket within your Party? Still, we pray for a free, fair and credible election.”
Kukah lamented that abducted children are still in the forests, in the hands of bandits and terrorists, urging Nigerians to be vigilant ahead of the 2023 general elections.
The cleric also called for a change of strategy on the part of the masses to dethrone arrogant men and women in power who are determined to destroy the country.
He said: “This is the last Christmas for this present government’s administration. Let us all do our duty as we have a chance to choose new leaders. Do not be cynical. God is not done with us. Choose leaders who, in your view will love us, will care for us, will cry with us, will laugh with us. Look ahead and do not look back.
“Although the responses to my messages suggest that, generally, Nigerians listen to our voices in the wilderness. However, the deliberate culture of pauperization and destitution of our people continues. So, we need a change of strategy so that we can turn a new page. We need a new strategy to confront those who sit on the throne of power in arrogance and are determined to reduce our country to a jungle.
“We need a new strategy that separates men and women of honour from those who have chosen dishonour. We need a new strategy that provides a clearer moral guide for ordinary citizens who, based on the moral strength of culture and religion, are seeking to build a good society, even if with straws. We need to stand up and stand firm. We need new mechanisms for saying no to the violence of governance.”
Kukah said it is sad that despite his many alerts, a dubious jihadist culture has held down Nigeria and the Federal Government now simply looks away.
“Before our eyes, the capital letters that spelt Nigeria are falling to the pressures and irruptive forces of primal ethnoreligious nationalisms. Before our eyes, a dubious jihadist culture has held our nation to ransom with the government simply looking away,” he added.