Russian lawmakers lined up Tuesday to lavish President Vladimir Putin with praise for recognising east Ukraine’s rebel territories, in a show of loyalty as they unanimously voted to ratify the Kremlin’s deals with the separatists. 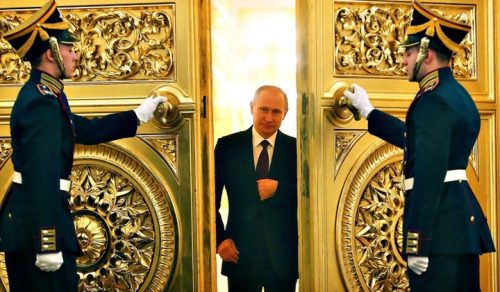 Lawmakers took to the tribunes to defend Putin’s move in ultra-patriotic speeches and broke into applause as they approved the agreements, which give legal cover for Russian troops to be sent in to Ukraine.

Not a single lawmaker in the lower or upper houses of parliament — the Duma and the Federation Council — voted against the deals with the Donetsk and Lugansk separatists.

In scenes reminiscent of Russia’s 2014 annexation of Crimea, the lawmakers presented Putin’s move as a major victory and backed dubious historical theories made in his national address the night before.

“Let’s thank the president for his bravery, for his responsible position,” Duma speaker Vyacheslav Volodin said as he opened the voting session.

A day earlier, Putin announced he was recognising the rebel republics.

The longtime leader did so at the end of an hour-long speech heavy in murky historical references.

He claimed Ukraine was “entirely created by Russia” and questioned Kyiv’s right to statehood throughout his address.

‘Not scared of sanctions’

As Western countries announced new sanctions against Moscow throughout the day, lawmakers said Moscow was being unfairly punished for correcting a historical injustice.

“Moscow is not scared of any sanctions,” Deputy Foreign Minister Andrei Rudenko told lawmakers as he presented the deals in parliament.

Even as Russian stock markets were hit and the ruble tanked to almost 80 to a dollar, Duma speaker Volodin called on Russians to “believe in our national currency.”

At one point, it seemed that one lawmaker had not voted in favour of ratifying a deal with the Lugansk People’s Republic, with the Duma’s voting results screen showing 399 out of 400 for it.

But soon afterwards, Communist MP Oleg Smolin owned up that he had not pressed the button in time and that he was indeed in favour.

The sessions included some of Russia’s most vehemently anti-Western public speakers that have sat in parliament for years — even decades — within the so-called “systemic opposition” that challenges Putin domestically but supports his foreign policy.

Among those who took the floor was Andrei Lugovoi — a nationalist MP who British police believe is a suspect in the 2006 poisoning of former agent Alexander Litvinenko in London.

Lugovoi, who the UK has tried and failed to extradite to London, said that Russia “spits on the opinion of the West”.

When the vote went from the Duma to the Federation Council, the upper chamber’s speaker Valentina Matvienko seemed to have tears in her eyes as the deals were ratified.

“I assure you that we are ready for (Western) sanctions,” she said after the vote.

A day earlier, she had been the only woman to participate in a highly unusual Kremlin security council meeting, in which officials made impassioned speeches to Putin to recognise the rebels. When it was her turn, 72-year-old Matvienko, who was born in Ukraine, asked: “What has Russia done wrong to Ukraine in 30 years?”