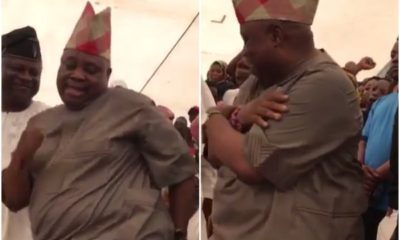 The Osun State Governorship Election Tribunal has declared the candidate of the Peoples Democratic Party (PDP), Senator Ademola Adeleke, as the winner of the poll.

The Tribunal made the declaration on Friday after dismissing a preliminary objection against the petition of the PDP and Senator Adeleke, challenging the September 2018 governorship election in the state.

The preliminary objection was filed by the All Progressives Congress (APC) and its candidate in the election, Governor Gboyega Oyetola, as well as the Independent National Electoral Commission (INEC).

The three defendants claimed that the petition of the PDP and its candidate was incompetent and the tribunal lacked jurisdiction to hear it.

Delivering a ruling on the preliminary objection, Justice Obiora Obi who is a member of the three-man Tribunal held that the petition was competent.

He also stated that the Tribunal has the jurisdiction to hear and determine it.

The judge held that there was merit in the appeal filed by the PDP and Senator Adeleke, adding that the declaration and return of Governor Oyetola by INEC was null and void.

He, thereafter, declared Senator Adeleke, who represents Osun West district in the National Assembly, as the winner of the election and duly elected governor of the state.

The tribunal also held that the Certificate of Return issued to Governor Oyetola be withdrawn and that a fresh one should be issued to Senator Adeleke of the PDP, having fulfilled the conditions of the law.

It said the petitioner scored the lawful majority votes at the election while the rerun held in the seven cancelled units were null and void and of no electoral effect.