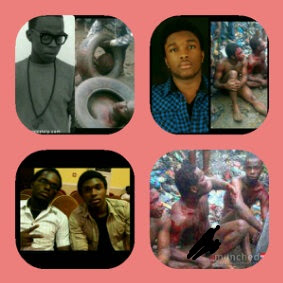 Yesterday, News Suurfaced Online about some students in university of port-harcourt being mobbed after stealing Phones and laptops . The story went viral online on blogs platforms and social networks with so many comments from people.Naijaolofofo Contacted a student who witnessed the whole act and he gave us Full details about what happened. According to him, The Students involved are Cultists, They went to Attack Someone, they were about 5 in number, so on their way out, A girl saw them and screamed,these alerted people and they attacked them.. One of them escaped and the remaining 4 were caught with Weapons and beaten by a man [Though they were already helpless and weak after being attacked by the crowd] , Hitting them Mercilessly and bringing them to a slow and painful death.. The man later Got Fuel and poured it in their mouth and lit it,Burning one student!, The man was stopped with the arrival of the police so he couldn’t burn the rest, they were later taken to the mortuary where the families of the deceased Came to claim the corpse…The news about Stealing of Phones, Laptops,  e.t.c are all Lies, probably in a bid to Stall
Investigations.. Since they said they were mobbed!!..
The name of the Students are Ugonna, Ilyod, Tekana and Chidiaka