Moscow and Kiev issue update on Ukrainian border guards reported killed
The Ukrainian president earlier claimed that all defenders died in a fight with Russian forces. 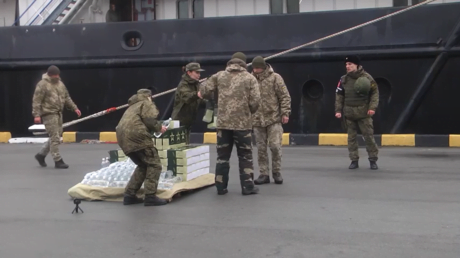 The Russian military has claimed that Ukrainian border guards, whom Ukraine initially declared entirely slain, survived, while Kiev’s military concurred that it might indeed be the case.

Both countries’ armed forces on Saturday said that a group of Ukrainian border guards stationed on Zmeinyy (Snake) Island, located some 48km off Ukraine’s southern coast in the Black Sea, were captured by Russian forces. Russia says they were taken alive and unharmed to Sevastopol in Crimea.

However, the initial story allegedly went as follows: a group of 13 border guards on the island were confronted by a Russian warship on Thursday. The Russian ship ordered the group by radio to surrender, the Ukrainians replied “go f**k yourself,” and the Russian ship opened fire. After several hours of fighting, all the guards were killed.

The story spread like wildfire on social media and was held up by the Ukrainian government, Western media outlets and journalists as an example of Ukrainian “heroism.” Ukrainian President Volodymyr Zelensky honored the troops he declared slain, saying: “On our [Snake] Island, defending it to the last, all the border guards died heroically,” and promising to award them the posthumous title of “Hero of Ukraine.”

The first signs that something else may have happened came early on Saturday, as Russia’s Black Sea Fleet announced that dozens of Ukrainian border troops were delivered to Sevastopol, Crimea, with videos online purportedly showing their arrival.

Ukraine’s Border Guard Service stated shortly afterwards that the troops on Snake Island “bravely defended themselves,” but were taken prisoner when the island was captured. According to the military branch, reports that all had perished were “preliminary,” and came after the Ukrainian military lost contact with the island. The ministry did not say how many guards were stationed on the island, and did not claim to know whether any died or were injured.

The Russian Ministry of Defense likewise confirmed the capture of the island. Spokesman Major General Igor Konashenkov said that 82 Ukrainian servicemen had been stationed on the island, that all surrendered, and that none were injured. Konashenkov said that as prisoners were being transported off the island, 16 Ukrainian Navy boats disguised as civilian vessels launched an attack on Russia’s Black Sea fleet.

Konashenkov said that Russians destroyed six of the Ukrainian vessels, and claimed that US drones were seen operating in the area, suggesting that the US “directed” the Ukrainian boats. These reports have not yet been corroborated.

A recording of the Snake Island garrison supposedly telling the Russian ship to “go f**k yourself” is still circulating on social media. There is currently no evidence that the recording is genuine, and Ukraine’s Border Guard Service only said that the troops gave a message indicating “no one will surrender.”