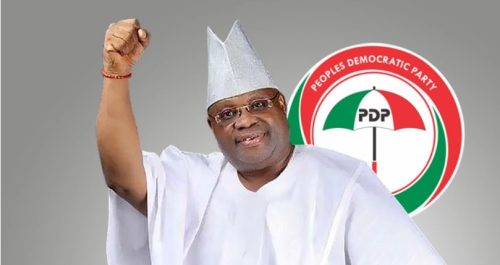 Nearly four years after failing, by a small margin, in his bid to govern Osun State, Senator Ademola Adeleke of the Peoples Democratic Party (PDP) has overcome the biggest obstacle to his dream.

On Saturday, he achieved a hard-fought victory over the state’s incumbent Governor, Gboyega Oyetola, of the All Progressives Congress (APC) in the state’s governorship election.

Senator Adeleke, 62, riding on the back of a campaign aimed at developing the state and retrieving what he says is his stolen mandate, secured 403,371 votes, 28,344 more than his closest rival, the incumbent governor. Governor Oyetola polled 375,027 votes.

It was enough for the Returning Officer of the election, Professor Oluwatoyin Ogundipe, to declare him winner and governor-elect.

“I declare that Adeleke Ademola Jackson Nurudeen of PDP, having satisfied the requirements of the law, is hereby declared the winner and he is returned elected,” Professor Ogundipe declared.

Saturday’s election featured 15 contestants with the rematch of Oyetola and Adeleke drawing the most attention.

As the results from the local governments trickled in, it was clear that the election which was generally considered peaceful was a two-horse race between both men.

Kehinde Atanda of the Action Democratic Party (ADP) came in at a distant third with 10,104 votes, followed by Lasun Yusuf of the Labour Party with 2,729 votes.