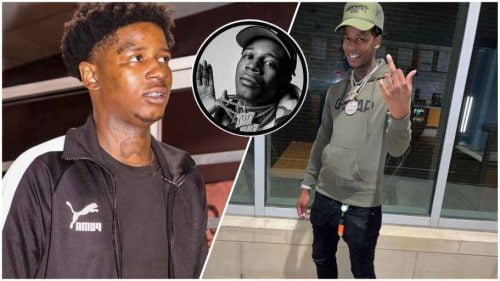 The cause of Scarr’s death is currently unknown, and no confirmation has been given from police or local news.

The musician reportedly passed away at the age of 22.

The Memphis hip pop star- born Alexander Woods – was reported dead by The Shaderoom on Thursday, and his passing was confirmed by rapper Gucci Mane, whose record label, Gucci Mane’s 1017 Records, he was signed to.

The cause of Scarr’s death is currently unknown, and no confirmation has been given from police or local news.

‘This hurt,’ Gucci wrote underneath a carousel of snaps that featured the Memphis native, adding, ‘I’m a miss you @bigscarr.’

In one of Scarr’s recent Instagram posts, he shared that he was going on tour with Key Glock, who is also a rapper from Memphis, as part of his Glockoma Tour 2023.

Born April 7, 2000, Big Scarr grew up in the Magnolia community of South Memphis. He started his rap career in 2019, when he released ‘Make a Play’ which quickly garnered popularity on YouTube.

Scarr was signed by Gucci Mane’s label in 2020.

He is most well-known for his mixtape, titled Big Grim Reaper, which was released in 2021, with a deluxe edition following the next year.  The tape featured at number 25 on the Billboard 200, and sold 22,000 copies in its first week.

His death comes after the killings of two other Memphis rappers, Young Dolph and Snootie Wild.

Young Dolph was killed in November 2021 while in Memphis, while Snootie Wild was shot in February while in Houston.