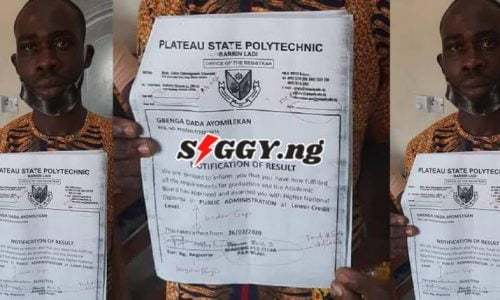 A forged HND certificate and fake identification card among other documents were recovered from the fake corps member.

The Police spokesman, DSP Suleiman Nguroje, in a press statement, noted on Tuesday that the fake corps member’s arrest came from intensive surveillance mounted by police operatives targeted at criminals and bad elements.

He said the fake corper was arrested around the premises of the NYSC orientation camp, adding that some documents including a fake NYSC identification card and forged certificate allegedly awarded by Plateau State Polytechnic among others were found on him.

According to the police, the suspect is a resident of Hokolul Street, Oyun tipper garage, Ilorin, Kwara State parading himself as corper member, who claimed to have graduated from Plateau State Polytechnic with a lower credit grade, seeking participation for the mandatory one year NYSC scheme before his arrest on 6th September 2021.

Commissioner of Police, Aliyu Alhaji, vowed to go tough on impostors, and also charged operatives attached to the SIB, CP’s Monitoring unit, Public Complain Bureau (PCB) to go after and fish out persons with questionable identity, to checkmate their criminal activities in and around the NYSC Camp.

He also ordered the prosecution of the suspect after discreet investigations into the case while promising to rid the state of criminals engaged in such crimes.