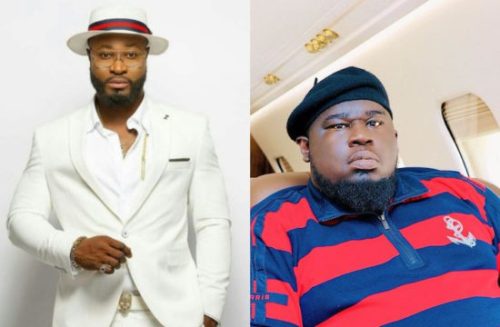 Popular Nigerian singer Harrysong was picked up by men of the Lagos state police command this morning over his running battle with music executive, Sososberekon.

Soso petitioned the Inspector General of Police on grounds of defamation and threat to life by Harrysong.

Recall that Harrysong had in a recent interview alleged that Sososoberekon, who he described as his enemy, sent some people to kill him in Port Harcourt .

Harrysong arrived in Nigeria this morning and was picked up by the police from the airport. Police sources told LIB that he will be questioned over the matter and might be released or detained further depending on the outcome of their investigation.

Singer Harrysong has replied music executive, Sososoberekon, who on Tuesday October 4, asked him to retract an allegation he made against him.

Recall that Harrysong in a recent interview said that Soso is his enemy and then alleged that Soso sent people to kill him in Port Harcourt.

Responding through his lawyers, Soso said the statement by Harry is false and without basis.

In a statement posted on his social media handles, Soso demanded that HarrySong retracts the statement he made accusing him of attempted murder and publish an apology in two national dailies and several online news outlets.  He also asked Harrysong to pay a compensation of five hundred million Naira.

It all started when Harry Song claimed that many in the entertainment industry who claim to be his friends are not.

The singer-songwriter made this known while speaking with the hosts of the Frankly Speaking Podcast.

He also said that Soso is not his friend as many believe.

He claimed Soso is his “enemy” and even tried to kill him.

Though he did not give a surname, it is suspected that he was referring to music producer and talent manager Soso Soberekon

Harry added that Soso sent people to kill him in Port Harcourt.