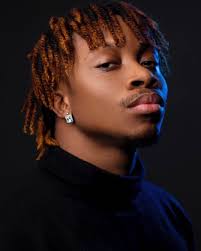 Talented Nigerian musician, Oxlade real name Ikuforiji Olaitan Abdulrahman has been trending on the microblogging site, Twitter since the video of his s3x tape debuted online.

In the viral video that debuted online on Tuesday, February 8, the 24-year-old musician was seen copulating with a woman. The romantic moment has got netizens talking as they dissect the dexterity of Oxlade’s prowess.

Oxlade, one of the most talented modern day artiste revealed to his fans that he is equally talented in other departments aside from music.

Since the controversial video surfaced on social media, several netizens have debated the double standard perspective of critics online.

Oxlade will not be the first Nigerian celebrity to entangled in a s3x tape controversy. His senior colleague, Tiwa Savage was dragged nefariously on the microblogging site, Twitter for similar reasons.

It would be recalled that in 2021, Tiwa Savage informed her audience prior to the leakage of her video, albeit, she was criticized by social media trolls. Meanwhile, Oxlade has been receiving primarily positive remarks from social media users since his video surfaced.

Another Nigerian celebrity whose nude content surfaced on social media is former Big Brother Naija contestant, Cross. Cross claimed that he mistakenly published his own nude photo on the social media platform, SnapChat.