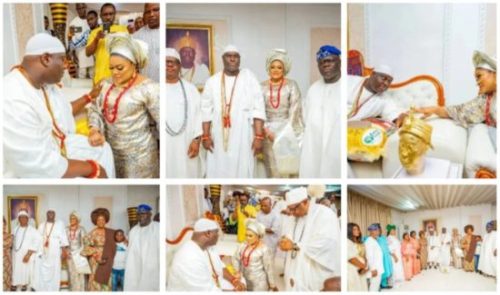 The Ooni Of Ife, Oba Enitan Adeyeye Ogunwusi has disclosed why he has been marrying several women for weeks now.

The Ooni, Oba Adeyeye Ogunwusi has become a subject of discussion following his series of marriages, especially as he is set to marry his sixth wife, Princess Temitope Adesegun today, October 24th.

It all started when the Ooni of Ife welcomed an Ebira-born queen, Mariam Anako to his Ile Ife palace in September 2022—nine months after Prophetess Seyi Naomi announced on Instagram her decision to divorce him. After welcoming Mariam, he has since gone to marry six other women in a space of three weeks.

Princess Temitope Adesegun would be his sixth wife.

The Ooni while marking his 48th birthday and seventh coronation anniversary, has now clarified why he married Mariam Anako and the others.

The Ooni explained that he tried making some changes but he couldn’t. Maybe referring to his decision to keep to only one queen and have concubines, the monarch said of the traditional heritage of Ile Ife, “This institution is bigger than me, beyond me. People in this palace are more than 800, they are close to a thousand. There are some people who have been living in this palace for more than 60 years, while some have lived here for more than 80 years old. Some people are over 100 years old in this palace.

If I had my way, I tried to challenge it but it blew in my face but thank God I’m still alive. It’s an institution that is rich in heritage, culture, and tradition.”