Shopper numbers in Britain deteriorated sharply in December, to 18.6% below 2019’s level compared with November’s 14.5% decline on consumers’ increased nervousness around the rapid spread of the Omicron variant, industry data showed on Thursday. 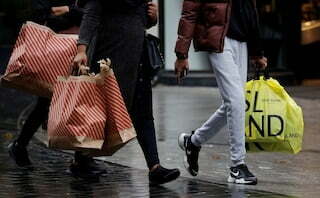 Researcher Springboard said its data, which ran from Nov. 28 to Jan. 2 showed shopper numbers, or footfall, declined from 2019, before the pandemic impacted trading, by 22.2% on high streets, 24.1% in shopping centres and 4.9% in retail parks.

“The natural boost in shopper activity which typically occurs in the run-up to Christmas did not materialise, due to a blend of consumers’ nervousness around the rapid rise in infections and the risk of missing out on Christmas, households isolating due to infection and the re-introduction of working from home (guidance),” said Springboard director Diane Wehrle.

The researcher noted that in the fourth week (the week beginning Dec. 19) the gap from 2019 narrowed to 13.8% across all UK retail destinations from down 19.1% in the week before, as consumers made the most of the six available trading days in the week running up to Christmas Day.

It said the biggest challenge for the retail sector in the weeks to come will be the ongoing working from home guidance that suppresses footfall, combined with increasing staff shortages due to COVID-19 isolation rules and the “great return” of goods purchased over the Christmas period.

Data published on Dec. 21 showed British retail sales growth fell sharply in the first half of December as concerns about Omicron kept shoppers away.