Former President Olusegun Obasanjo on Friday said he once refused to use government’s fund to complete a Christian Association of Nigeria building in Abuja. 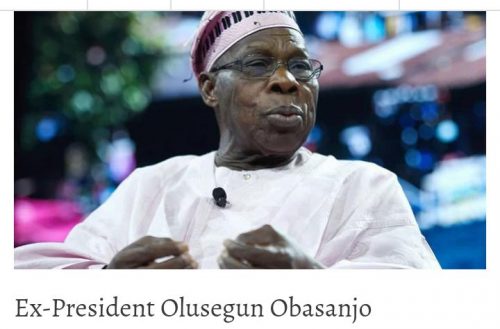 The former president, who was the Convener of the programme in honour of Mbang, described the former president of the Christian Association of Nigeria as a lover of Nigeria. The book, a memoir, chronicling the journey of the octogenarian, is titled, ‘My Life and Times.’

“But he insisted. Again, persistence. I had no choice to agree to now become a fundraiser for the completion of the National Christian Centre and I did. I got people together –the rich, the not-so rich, the poor, the not-so poor and we raised money to complete the National Christian Centre. I don’t believe he has been given credit for that work because if he had not gone the way he did, may be that centre will still remain uncompleted till today.”

At the programme, he reminisced how “pressure” was mounted on him in 1999 to contest as president after he was released from prison.

Obasanjo recalled how he met the cleric before his election in 1999, saying, “I came out of prison and pressure was mounted on me to contest election as president. Initially, I resisted and I said how many presidents do you want to make out of me but the pressure continued to mount.

“Then, I caved in. When I caved in, I decided to go round and one of those I visited was the Prelate of the Methodist Church in Nigeria, Sunday Mbang. I haven’t met him before but I made a courtesy call and I said, ‘Sir, I have come to see you’ but before I finished, he said, ‘I will not vote for you and I don’t know what you come here for’.”

He said though the cleric might not had voted for him but he won the election.

“As the President of CAN and me, a Christian, he then became my boss religiously and I became his boss politically and of necessity, we had to work together. Somehow, interest started developing. This man who will say it as it is a man that you need to have around you so that you can say it as it is,” he said.

Despite the resounding secessionist agitations as well as many local and international predictions that Nigeria is close to becoming a failed state and will soon break up, Obasanjo said Nigeria would continue to exist no matter what happens.

The former President noted that the enemies of the West African nation with over 200 million people won’t win in their agenda to see the breakup of the country.

He also said the cost of staying together as a nation was cheaper than the cost of dividing Nigeria.

Obasanjo said he would continue to work for the peace and progress of a united Nigeria, adding that the “many enemies” who don’t want to see the country’s continued co-existence would fail.

The former head of state made the statement at a time when secessionists’ agitations, fuelled by perceived injustice and worsening security situation, have increased across the country especially in Southern Nigeria.

The regime of the President, Major General Muhammadu Buhari (retd.), has been battling with secession groups including the proscribed Indigenous People of Biafra led by detained Nnamdi Kanu; including the Yoruba Nation separatist group spearheaded by Prof Banji Akintoye and embattled Sunday Adeyemo aka Sunday Igboho.

Speaking directly to the celebrant, the ex-President assured the Christian leader that the enemies of Nigeria won’t win.

Obasanjo said, “We are here to honour somebody we should honour, and learn from him (Mbang), to show that we genuinely love and appreciate him for the service he has rendered to the Christian community in this country and world over. And to assure him that whatever happens, we will continue to work for unity, peace, security and progress of this country.

“There are many people –high and low – who can be described as enemies of Nigeria but they will not win over those who are friends of Nigeria.”

Also at the event was the Akwa Ibom State Governor and Chairman on the occasion, Udom Emmanuel, as well as dignitaries from all walks of life.

Mbang spoke about how he became friends with Obasanjo, adding that, “since then “we have become brothers, but of different mothers.” He thanked the former head of state as well as other dignitaries present for the honour.

Emmanuel thanked Obasanjo and Mbang for keeping together over the years, assuring that they would remain his fathers.