OAU Student: How Adegoke’s Body Was Evacuated, Dumped Inside A Bush – IPO Reveals 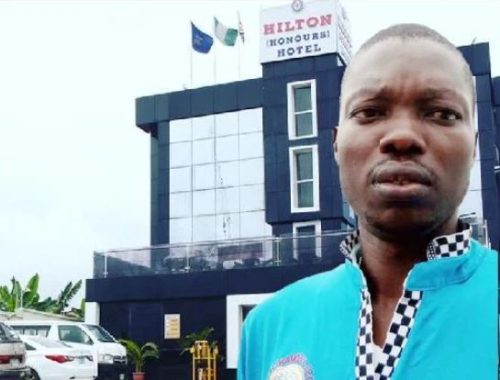 According to a report by The PUNCH, Inspector Afeez Olaniyan, the Investigative Police Officer that undertook the first probe into the death of late Timothy Adegoke, a Master’s student of Obafemi Awolowo University, Ile-Ife, has narrated how some defendants arraigned in connection with the death of the deceased evacuated and dumped its corpse in the bush.

Being led in evidence by the prosecution counsel, M. Omosun during the continuation of the trial on Tuesday, Olaniyan said from the statement extracted from Adeniyi Aderogba and Oyetunde Kazeem, two of the staffers of the Hilton Hotels, Ile-Ife, after the death of the late Adegoke, his corpse was wrapped with a duvet, and taken out in a Hilux van driven by the son of the hotel owner, Roheem Adedoyin, to where it was dumped.

Olaniyan also said during the investigation, he was able to establish alteration in the lodging documents, when he interrogated Adesola Adedeji, the receptionist on duty when the deceased lodged in the hotel.

He further said, “We were able to establish that late Timothy actually lodged at Hilton Hotel on November 5, 2021. The lifeless body of late Adegoke was discovered on Sunday 7th November, and the corpse was dumped on the refuse site.

“From the statement made by Adeniyi Aderogba and Oyetunde Kazeem, they told me that the corpse was wrapped with a carton and duvet which they put in a sealed bag and carried him at the back of Hilux vehicle driven by Roheem Adedoyin to the point where it was dumped.

“There was doctoring of the hotel documents which the original one was later discovered from Adesola’s phone. Circumstances that surrounded the death was highly suspicious and that was why the corpse was deposited for expert opinion to ascertain the cause of the death.

“I visited room 305 where the deceased was lodged. It was observed that the mattress inside the room was new compared to the ones in the other rooms. I asked why the new mattress. The response was that the hotel was initially known to be Hotel Di Ganga and the taken over necessitated the changes of some of the mattresses.

“Also, I noticed something like blood pattern on the door. We decided to lock the room and went away with the key. On our next visit to the room, we went with an expert, the Crime Scene Manager, DSP Kilani, he confirmed that some of the patterns were mere paint and he took the one suspected to be blood for further examination.

Olaniyan also said during his visit to the hotel, he observed that the DVR powering the facility’s CCTV cameras was disabled and when he raised the matter, he was told that it was disabled due to the renovation work being done in the hotel.

Justice Adepele Ojo later adjourned the case to March 16, when the pathologist would give evidence before the court.