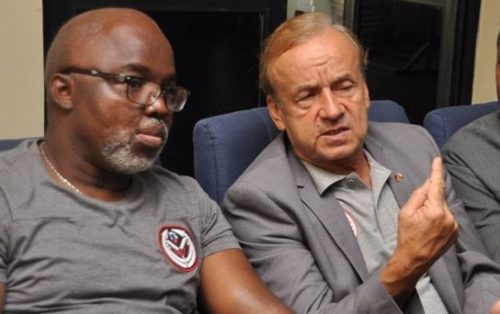 Nff boss, Amaju Pinnick who disclosed this while guesting on Arise News programme on Monday, said the sponsor of the Super Eagles, Aiteo Group will make money available to sort out the German’s outstanding payments.

As at May 2021, the NFF was owing the erstwhile Super Eagles coach six months salaries.

Although the NFF President owned up in December 2021 that the federation was still owing Rohr when he was sacked, he did not mention how many months’ of outstanding salary arrears they owed him

“Regarding the former coach, Gernot Rohr, I was in Ghana last week to see the Executive Vice Chairman of Aiteo, Benedict Peters.

“They are our major sponsors. They are meant to be accounting for about almost 30% of our expenses.

“I needed to see him because I knew they had a major challenge in Yenagoa. We had a good discussion so by tomorrow (today, Tuesday) we are going to receive money from them.

“That is the assurance he gave, to pay off Gernot Rohr, his outstanding and everything legally permitted, to pay him so that we can say thank you very much, bye,” Amaju said.

Amaju added that the federation has money to pay the incoming coach and his backroom staff.

“We have some money for the incoming coach.”

NFF sacked Rohr on December 12, 2021 with the federation’s president, Amaju stating that Rohr’s outstanding monies would be paid in five months

“We are owing him a couple of monies and they will be cleared off (in) five months.”