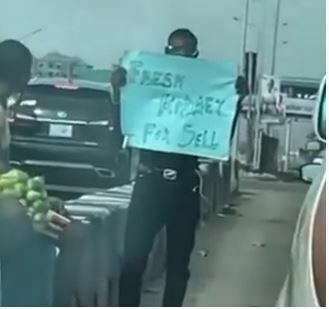 Nigerians took to social media to react after the man was spotted carrying a cardboard advertising a fresh kidney for sale.

There have been mixed reactions on social media after a man was seen in Lagos traffic yesterday with a placard that revealed that he has a fresh kidney for sale.

We don’t know if the kidney he wants to sell is his or that of another person.

Some found it funny saying this is where Nigeria has pushed him, while some even joked about it saying ”E Don Red”.

”Na to go buy Cardboard paper ?? Wetin I wan sell Na my brain, it stopped working”, a social media user wrote while commenting about it.

”I saw this guy yesterday in ikate Lekki traffic light”, another one said.

Some however took it seriously and said if the Government does not arrest the guy and he cashes out, some criminals might take advantage of it and start harvesting organs of innocent citizens.

One wrote; ”No matter how dis night seems funny, I don’t think d relevant authorities should let dis go, dis guy should be arrested before some criminal minded people turn this to lucrative business by harvesting people organs to sell.”

Another said; ”Holy Mary that guy should be arrested immediately because it might not be his own kidney he wants to sell.”