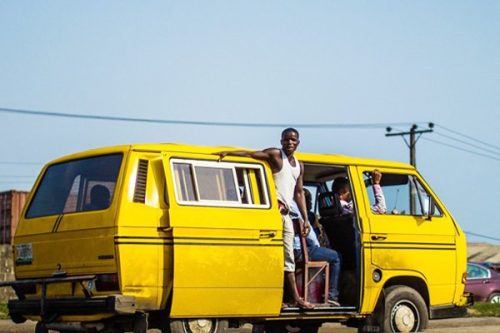 A young Nigerian man has gone online to narrate how he recovered his phone which was stolen by a passenger who sat beside him in a public bus.

According to the Twitter user identified as Daddy Flo, the theft was planned by the passenger and the bus conductor who acted as a distraction, so the mission could be accomplished.

Narrating the incident, Daddy Flo said: “Something crazy happened to me this morning. I went to the court at Ogudu this morning, after I was done, I boarded a danfo at the bus-stop with the intention of dropping at Secretariat bus-stop.

There were about 9 passengers in the bus.. and I entered & sat at the middle row beside a young guy. After the bus had moved forward a little, the conductor said that my money is N300,

I was irritated like how will you charge me N300 from Ogudu to Secretariat when it should be N200 max?. Even some conductors would accept N100 or N150 if you plead with them.

I told him I can’t pay more than N200, he said I should get down. The bus stopped and I alighted, we never kuku go far from the bus-stop. Barely two seconds after I alighted from the bus, my brain told me “Chief Comrade, something is wrong”.

The processor in my brain directed me to the left pocket of my trousers which felt a bit light, then it hit me that my phone had been stolen by the young guy who was beside me. This is a tactic used by some of the danfo in Lagos.

The conductor, passenger and driver were all in on it. The role of the conductor is to distract you by charging you an exorbitant fee which you would surely protest against or they will delay giving you your change, in both situations, all your attention would be on the conductor while the passenger/thief beside you removes your phone or wallet from your pocket.

The passenger would then give a signal to the conductor that he has picked your pocket successfully, in this case the passenger/thief asked the conductor for his change, that was the signal. I was a victim of this sometime in January 2019 at Lekki so immediately I got down from the bus I knew immediately say them don run me format.

After I processed what had just happened, adrenaline kicked into my body so hard & I started chasing after the bus, walahi if you put Mbappe, Salah and Dan James beside me at that moment them no fit gap me. The more I sprinted the further the bus seemed to be away from me, I didn’t lose hope I continued sprinting, thinking in my mind that what happened in 2019 must not happen again

I’m sure that the cars that passed me by must have wondered why this guy dressed corporately in shirt and trouser was running on the expressway. One danfo passed me and the conductor asked me what happened and I told him my phone had been stolen but he probably didn’t hear me because he zoomed off, then another danfo passed and asked me what the problem was,

I told the conductor that my phone had been stolen by another danfo in front, the danfo then stopped and I jumped and hung around by the door the way the conductors usually do, at this point I had a bit of hope. The conductor then asked me to sit down and I immediately obliged. I had already taken a mental picture of the danfo that stole my phone, it had a strip of white painting at the top part of the rear it was still in sight but was far ahead,

I pointed the bus out to the driver and the chase began. There were some old women in the bus, one of the women said “why did I not take bike?” I was disgusted with the question like how many okada do you see on the expressway? I was about to respond to her in anger before the conductor said “Mama nibo ni e ti ri bike nibi bayii?” Meaning “Mama do you see any bike around?”

Another woman was like “Ah sim yen de lo ma n dun eyan ju” meaning “It’s the sim of the phone that would be more valuable in my mind I was like.. In these trying time of collapsed power grid and diesel at N720/liter na the phone dey important pass, I had all my contacts backed up on google drive so I could easily recover them.

The driver then told her that it was a different bus from the one I pointed to him and that the bus we were chasing after was still ahead I was hoping the bus we were chasing after was going to stop at a bus-stop to drop a passenger so that we could catch up with it but it just kept on going, at this point I had lost sight of the bus but the driver was positive that he could meet up.

When we got to Estate bus-stop at Alapere, the old woman said she wanted to get down, I was like “this woman must be one of my village people because WTF?!” In my head I had already dragged her down from the bus. The conductor then shouted at her to hurry up and get down.

The bus then took off again and we had lost sight of the bus we were chasing, the driver then told me to calm down if I want to see my phone, I was like “I’m calm bro, do I not look calm to you? At this point my brain split into 4 parts and started thinking the first part was already pricing iPhone X at computer village,

the second part was already thinking of how I’ll quickly go to First Bank, Access Bank and GT Bank to block my bank accounts, the third part was swearing for that old woman if eventually I don’t recover my phone while the fourth part was focused on the chase.

When we got to Toll gate/7up bus stop, the driver said that the bus had turned right onto CMD road, he drove further & stopped the bus along another road that linked the express to CMD road & told me to go & block the bus in front. I paid the conductor, alighted from the bus and began sprinting towards CMD road,

I only looked left once before I crossed the road not caring that a Toyota Corolla was on the other lane, the person driving the corolla had to hit the brakes hard. I immediately apologized. I then saw the bus coming towards my way and I immediately took off my glasses so that they wouldn’t recognize me, at that point, the conductor was calling Berger,

I then signaled for the bus to stop but it didn’t stop and it kept on driving I tried to stop an Okada and chase after the bus. Fortunately for me, the bus had stopped a few meters ahead and was waiting to pick me up, I then ran towards it and boarded it.

Immediately I got on the bus I asked the guy who sat beside me “wey my phone?” Abi you wan collect? He was like ”I no carry your phone”. I was about to light him but he had quickly placed my phone on the seat of the bus, the passengers at the back seat shouted “Ahh!” I immediately took my phone and said “God go punish you, the driver and conductor” and I got down from the bus.

The bus immediately drove off and the conductor looked Bomboclaated, he must have been shocked like how did this guy get here so fast? He must have thought I was another victim that they could steal from hence why the bus stopped for me. I’m glad God didn’t allow my enemies triumph over me

My biggest regret is that there was no way for me to inform the driver & conductor of the other bus that I had recovered my phone. If I had given up then my phone & probably all the money in my accounts would have been gone I come dey feel like Tom Cruise after a high speed chase.

Lagos would teach you and humble you. I wish that 17 molly guy could tell my story, he’d probably say he was chasing the bus for about 2 hours.”