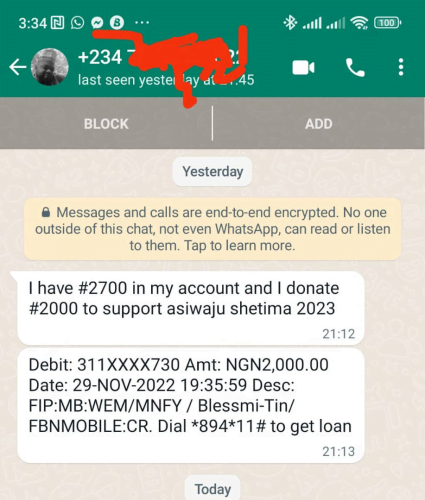 How much money can you spare for a good cause? How much sacrifice are you willing to make to see your aspirations realized, especially if a third person is involved?

Yesterday, the APC PCC launched its Bless Mi App, a platform intended to solicit funds for its presidential campaign; they hope to raise N5 billion from the general public.

Huge millions have already been realized from the initiative, which was launched less than 24 hours ago; donations have been pouring in, and the maximum amount that can be donated is 50 million Naira.

A young man from Ondo State has spoken out about why he drained his bank account to support Tinubu and Shettima’s campaign. Arowolo Amisu Tosin of Ondo state showed a screenshot of his widow’s mite gift, saying, “I have #2700 in my account and I donate #2000 to support Asiwaju/Shettima 2023.”

Isn’t that adorable, Arowolo is now left with only 700 naira as his account balance. It might interest people to know that Asiwaju’s candidacy, contrary to what naysayers claim that it is a gold mine where the Jagaban freely shares money as if he prints the naira is all a fallacy.

Thus far, Nigerians are supporting Tinubu’s candidacy out of patriotism for what they believe in. Arowolo stated that Tinubu would make Nigerians proud, so he is willing to go hungry today to make it a reality.

Check out the screenshot below and let us know what you think.

Osigwe Omo-Ikirodah is the Chairman and CEO/Principal of Bush Radio Academy.