A man has been arrested after attempting to shoot his wife’s lover. 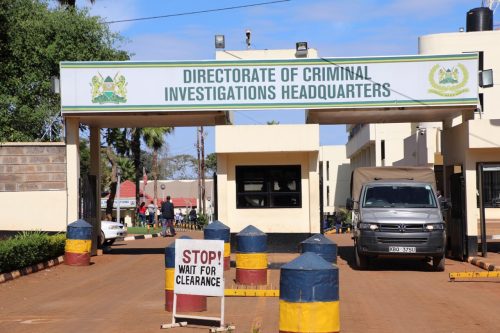 It happened after the irate man caught him having sex with her in a car.

The man has now been detained by the Police in Mtwapa, Kilifi County of Kenya.

Local news outlets reported that the man trailed his wife from their home in Mtwapa to Tamaduni Gardens in Kilifi town on Saturday afternoon, where he caught her with the 29-year-old man having a good time in the car.

The country’s Department of Criminal Investigation said in a statement;

“He immediately reached for his czeska pistol and discharged one round in the air, ostensibly to scare and get hold of the young man who jumped out of the car and fled for dear life.

“The suspect tried to stop the fleeing man who sprinted faster than a cheetah.”

After the incident, the man surrendered to police station where he was arrested and his firearm confiscated.

“Dejected, the suspect who unjustifiably used his firearm posing danger to other members of the public, presented himself at Kilifi police station where he is currently being processed for arraignment.”