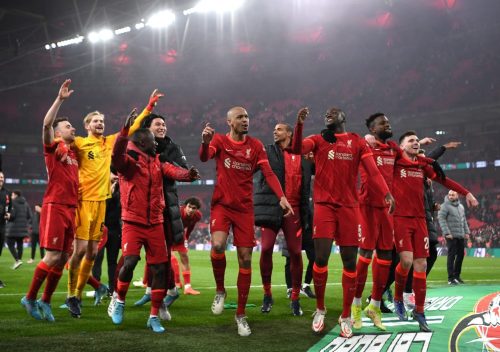 Liverpool on Sunday defeated Chelsea on penalties to clinch their first domestic cup title in a decade, having won it in 2012.

This was the second time both teams would face each other in the final of the League Cup with their first meeting being in 2005.

The game at Wembley on Sunday saw goals ruled out and chances missed as both sides played for 120 minutes with a 0-0 scoreline.

The game went into penalty shootout, with all 20 outfield players converting their shots successfully, as well as Liverpool goalkeeper Caoimhin Kelleher.

Chelsea goalkeeper Kepa Arrizabalaga, who was brought on in place of Edouard Mendy in extra time specifically for the shoot-out, fired the decisive spot kick over the crossbar.

Chelsea had three goals disallowed for offside during the game. They were also left to rue two big misses by Mason Mount but a magnificent display from keeper Edouard Mendy also helped.

Liverpool created a host of chances and had a Joel Matip goal ruled out for a foul and offside, but the Reds went on the carry the day after the shootouts.

The Jurgen Klopp side are still in the race for the Premier League (sitting in second place behind Manchester City), in the FA Cup, and in the Champions League this season.