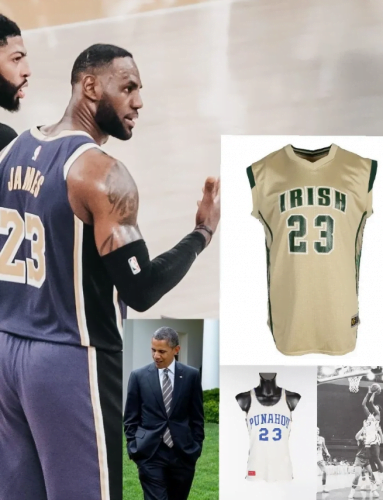 Julien’s Auctions held Sports Legends, the world-record breaking auction house to the stars’ sports event of the year, Saturday, July 17th and Sunday, July 18th, 2021, in front of an international audience of sports fans, investors and collectors bidding live in person, on the phone, and online for some of the most important and coveted pieces of sports history in Beverly Hills and online at Juliensauctions.com.

The most highly anticipated moment of the auction was the sale of LeBron James’ St. Vincent – St. Mary’s high school jersey which he wore for his iconic Sports Illustrated “The Chosen One” cover of the February 18th, 2002 issue which was realized at $512,000 and set a new world record for highest selling price for a high school jersey sold at auction.

The sale shattered the previous world record held by Julien’s sale last year of Barack “Barry” Obama’s high school #23 jersey worn during his senior year at Punahou School as a member of the 1979 Hawaii State Champion boys’ varsity team which sold for $192,000.

Consigned by investor Mark Pepitone from his world record-breaking collection, this photo-matched jersey was worn by James both for the historic photo shoot and the high school game that same evening where the future NBA icon considered the greatest player of all-time scored 32 points and collected seven rebounds.

The most watched and famous pre-college prospect to ever play the game, James wore this very jersey when he was introduced to the sporting world by gracing his very first cover of Sports Illustrated. 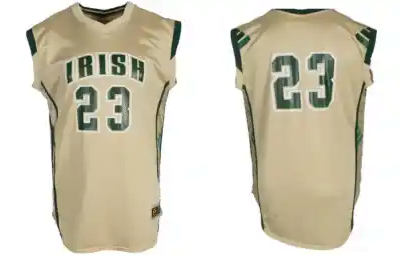 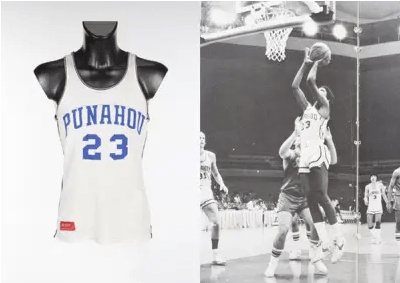 One of the most sought-after modern trading cards of all time from none other than basketball titan and phenomenon, Michael Jordan, was another spectacular sale of the auction. His 1986-1987 Fleer #57 Basketball Rookie Card, PSA Gem Mint 10 was sold for $384,000, well over its estimate of $200,000.

Pictured on the card is the legendary basketball superstar at his best, gliding over defenders for a jam with his tongue out. In addition, a Michael Jordan 1986-1987 Fleer basketball rookie card graded Gem Mint 9 sold for $32,000.

Other top selling Michael Jordan artifacts included (with winning bids): a pair of Air Jordan 11 (XI) basketball shoes hand signed by the 14-time All-Star and five-time MVP legend and Basketball Hall of Famer on the bottom of the Air Jordan 11’s which sold for $57,600 (well over its estimate of $20,000) which Jordan wore during the 1996-1997 NBA Playoffs,; Jordan’s Olympic Dream Team jersey worn during the 1992 Olympics in Barcelona, Spain which was missing for years and was part of the sports memorabilia scandal of the century when it was switched for a fake jersey and sold at auction ($38,400); a Michael Jordan signed Air Jordan 1’s 1994 Retro 10th Anniversary Special Edition ($12,500); a 1996-1997 Michael Jordan game issued signed Chicago Bulls home jersey ($15,625) and a Michael Jordan signed home white Chicago Bulls jersey ($10,240).

A collection of jerseys and uniforms worn by the late LA Lakers legend and 18-time All-Star, Kobe Bryant, shined on the auction block such as Bryant’s Lakers home gold uniform, worn during his 1996-1997 rookie season with the number “8” and “Lakers” sewn on the chest with purple and white tackle twill and his same number “8” and “Bryant” on the back with a gold NBA logo patch sewn on the left shoulder of the jersey, in honor of the NBA’s 50th season which sold for $75,000, well over its estimate of $50,000; Bryant’s 1996-1997 rookie game worn Lakers Road uniform signed both on the front and the back on his number “8” sold for $96,000; a framed Kobe Bryant signed limited edition jersey, one of only eight made, listing some of Bryant’s career accomplishments prior to changing his number to 24 before the 2007 season, sold for $10,240; and a Kobe Bryant Los Angeles Lakers home jersey game worn during the 2006-2007 season which sold for $12,800.

Joining Jordan’s Fleer basketball rookie card at this event were some of the most valuable and sought-after trading cards to be offered at auction including New England Patriots legend Tom Brady’s 2000 Playoff Contenders rookie card #144, graded a BGS 9 with BGS 10 Auto which sold for $204,800; and Mike Trout’s 2009 Bowman Chrome Gold Refractors rookie card BGS 9.5 which sold for $83,200.

A champion league of artifacts used by European football’s all-time greats were represented, kicking off with the French national hero Zinedine Zidane’s 1998 FIFA World Cup Final – match prepared signed jersey used during the final, the game in which France won their first ever World Cup title, which sold for $108,800. This particular Adidas brand jersey has the “FIFA WORLD CUP FRANCE 98” embroidered on the front right breast, with the “Brasil France 12-07-98” patch on the left. The bottom front right of the jersey has the Official Garment French Football Federation tag stitched on. 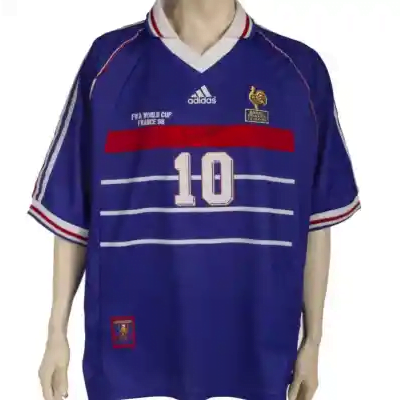 Zidane signed the center of the jersey just above his number 10. This jersey was purchased privately in 2016 by a French collector from a former French National team player, to which news articles and magazines detailing this sale and photos of the consignor alongside Zidane with the jersey are included as well as a Letter of Authenticity from Adidas regarding the jersey’s usage and photographs of the consignor with Zidane as he is signing the jersey.

A 1970 FIFA World Cup Winner’s Gold Medal awarded to Marco Antonio Feliciano also stood atop the auction podium with a realized price of $108,800.

As one of the greatest players in the history of the sport, the auction of the late Diego Maradona’s highly sought after and treasured memorabilia was one of the weekend’s biggest highlights. A collection of storied football jerseys worn by the late Argentine soccer icon went for the gold including his jersey worn in the October 31, 1993 World Cup Qualifier match Australia vs Argentina, which Maradona switched jerseys with Robbie Slater the Australian player after the game, that sold for $25,600; Maradona’s signed and game worn jersey from the 1990 World Cup match against Brazil which sold for $51,200; a framed Argentinian National Team jersey worn in the game where he scored his first ever goal for Argentina which sold for $28,800; a Pelé and Diego Maradona signed jersey display which sold for $16,000; and a 1984 short-sleeved Napoli jersey signed by Maradona that sold for 12,800.

Julien’s Auctions is the world record-breaking auction house to the stars. Collaborating with the famous and the exclusive, Julien’s Auctions produces high profile auctions in the film, music, sports and art markets. 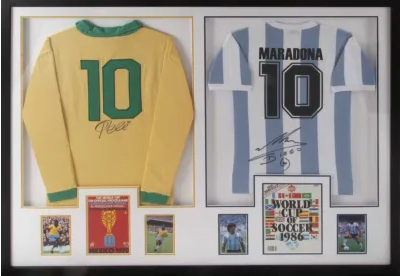 In 2016, Julien’s realized $5 million in the historic auction of the Brazilian soccer icon, three-time World Cup Champion and FIFA Player of the Century’s collection of memorabilia, personal property and awards, which featured the sale of Pelé’s 3 World Cup Gold medals, sold for a combined total of US $970,992 (£674,300), including his 1970 World Cup winner’s medal sold for $427,100 (£346,000), which set world records for the most expensive Pelé item and the most expensive soccer medal ever sold at auction.

In 2016, Julien’s Auctions received its second placement in the Guinness Book of World Records for the sale of the world’s most expensive dress ever sold at auction, The Marilyn Monroe “Happy Birthday Mr. President” dress which sold for $4.8 million.

Julien’s Auctions achieved placement in the Guinness Book of World Records in 2009 for the sale of Michael Jackson’s white glove, which sold for $480,000 making it the most expensive glove ever sold at auction.

In 2020, Julien’s Auctions received its third Guinness Book of World Record placement for the sale of Kurt Cobain’s “MTV Unplugged” 1959 Martin D-18E acoustic-electric guitar, which sold for $6 million making it the world’s most expensive guitar ever sold at auction.

Based in Los Angeles, Julien’s Auctions has a global presence bringing their auctions and exhibitions to targeted destinations worldwide including London, New York, Las Vegas, Japan and China. Live auctions are presented for bidders on-site and online via live streaming video and mobile technology.