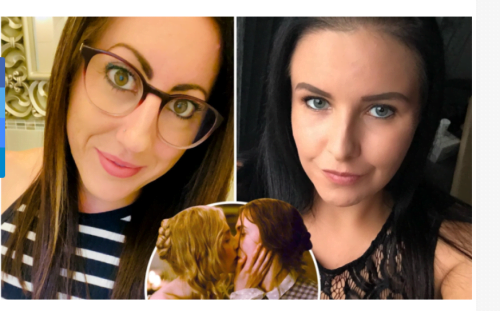 Jennifer Gilmour, a British woman, admitted that she wasn’t aware of her attraction to women until her husband brought it up.

34-year-old Jennifer, a writer, and mother of three children (ages 12, 10, and six), said that watching the BBC series Killing Eve with her husband James during lockdown opened her eyes.

Jennifer also disclosed that James, her “understanding” spouse, had given her permission to experiment with other women and had pushed her to explore her sexuality

She told The Sun;

“First, we watched film This Is England and I found myself thinking of little else than star Vicky McClure for the rest of the day.

“We moved on to Killing Eve and I was equally distracted by Jodie Comer, but I just put that down to admiration more than anything else.

“It was actually my husband who first made the suggestion that I might be a lesbian.

“I took offence initially. Why can’t a woman appreciate other women without it being sexual, I thought.

“But as time went on and my interest in women only intensified I couldn’t deny my true feelings.

Jennifer reported that after utilizing the dating app Tinder to meet ladies and always being upfront about her circumstances;

“What I wasn’t expecting was the level of affection you experience with a woman. I felt like an equal.

“Before marrying James, I had survived domestic abuse from a previous relationship so there was something endlessly comforting in that.

“For the first time in my life I felt as though I could relax.

“I would happily sleep naked next to a woman, when I’d previously slept head to toe in pyjamas.

“While I had certainly found men attractive and could appreciate a good-looking bloke, it was not comparable to sexual feelings I felt towards women.”