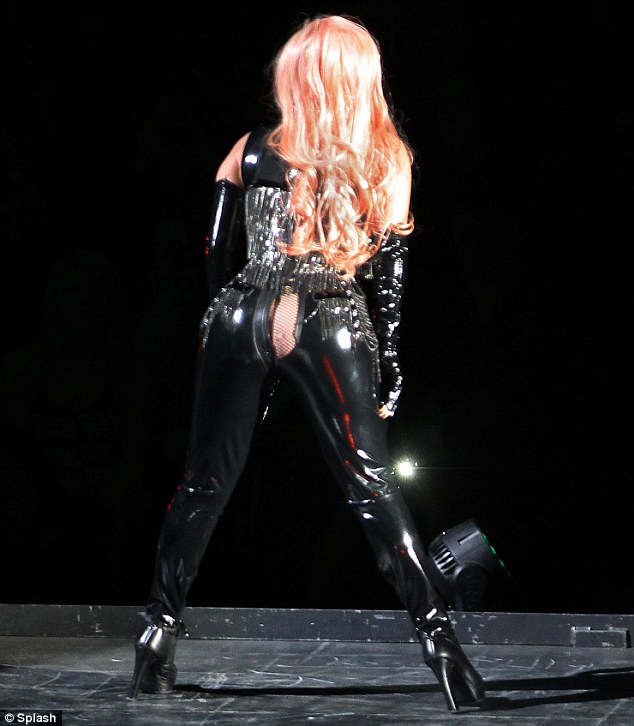 It’s almost expected of her to have a wardrobe malfunction, but even Lady Gaga wasn’t prepared for this one.
The 26-year-old singer split her latex pants as she kicked off the North American leg of her Born This Way Ball tour  in the first of two sold out shows in Vancouver, Canada.
The New York native was performing new choreography for her song Heavy Metal Lover, in which she rides in on the stage transformed into a motorcycle.

That’ll leave a mark: Lady Gaga tore right through her new Versace latex costume during the opening night of her North American leg of her tour in Vancouver on Friday

Wearing a pink wig and a full leather ensemble, she then breaks away from her tires and other gear to cavort on with her dancers.
Gaga has been performing the song as part of her tour for the past year, but kicked off the tour with a new set of Versace costumes.
‘Tonight @ladygaga is kicking off the N. American portion of her tour w a full new set of Versace costumes for herself and her dancers too!’ the fashion house tweeted on Friday night. 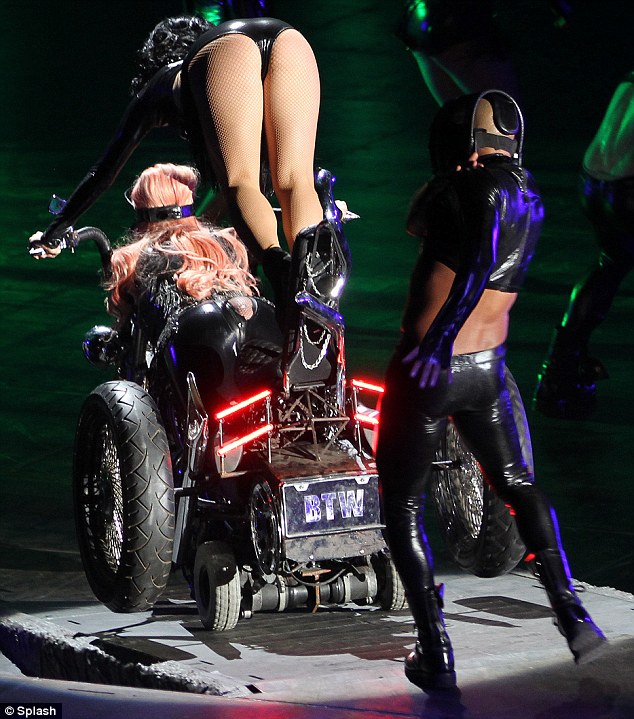 Heavy metal: For her song Heavy Metal Lover, the singer arrives on stage as a motorcycle 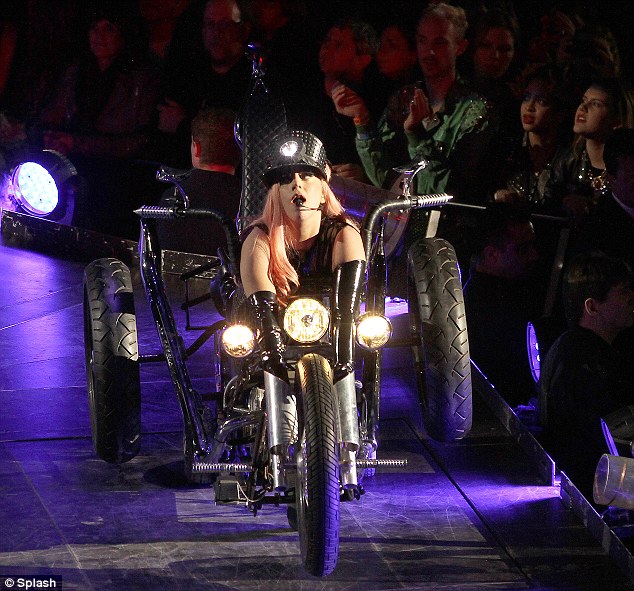 Putting on a show: The embarrassing tear in her trousers was in full view of the packed Rogers Arena, which seated 19,000 of her Little Monsters 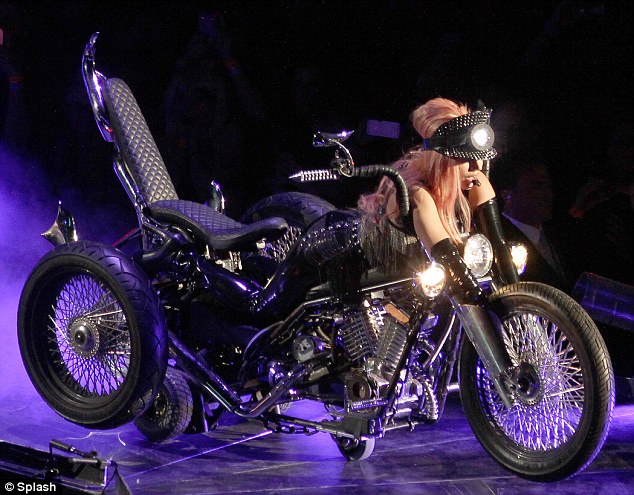 Wild woman: Lady Gaga likes to push her music — and herself — to the limits

The latex apparently couldn’t hold up to the gruelling new moves and tore along her backside.
But she used the wardrobe malfunction as a talking point with her fans, teasing the ripped fabric with her hands and urging her Little Monsters not to care what people say about them.
The Poker Face singer has been battling critics for the past few months for a dramatic 25 pound weight gain, a move she’s embracing even in her skimpiest outfits. 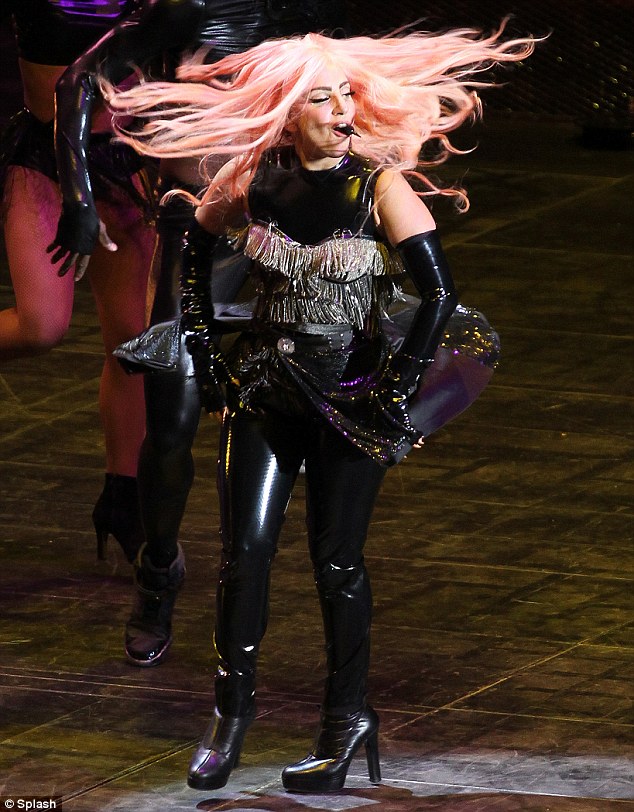 ‘I am not going to go on a psycho-spree because of scrutiny,’ she tweeted back in September before launching a new section on her website called Body Revolution.
‘This is who I am. And I am proud at any size.’
She also took to the site to thank her fans for helping her over the scrutiny of her weight. 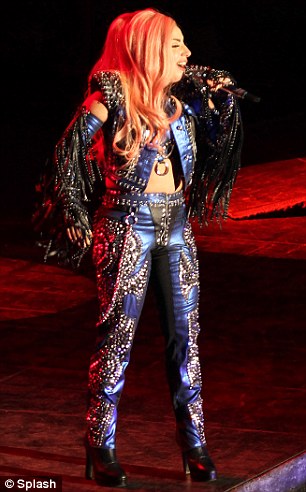 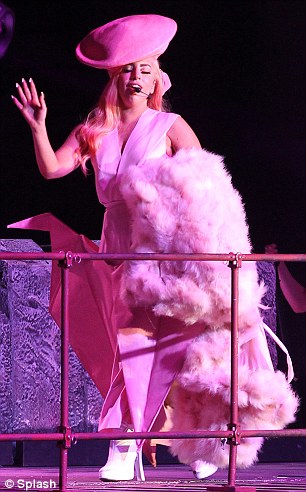 Fabulous: Costumes like this leather-studded get-up and pink origami dress were provided by Haus of Gaga, Christian Dada, Armani, Versace, Moschino, and Void of Course 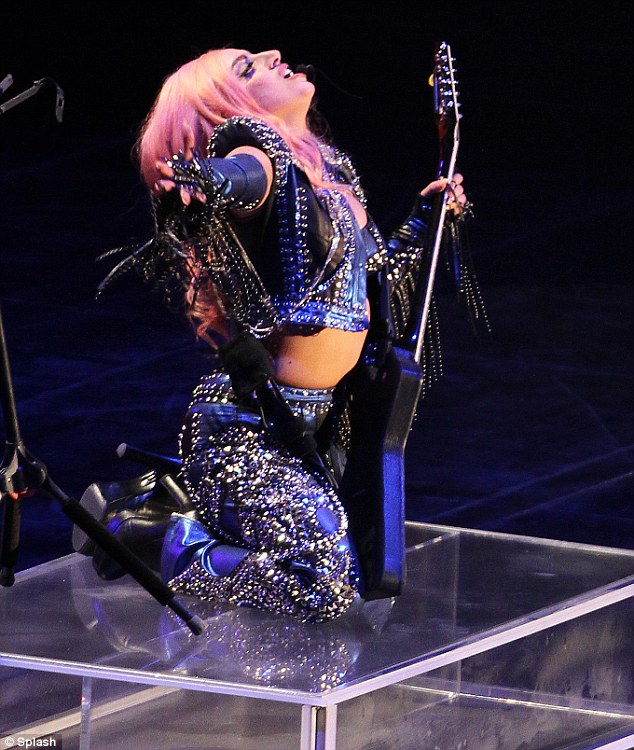 Born this way: The singer, born Stefani Joanne Angelina Germanotta, was visibly bulging out of her tight rhinestone trousers during the concert 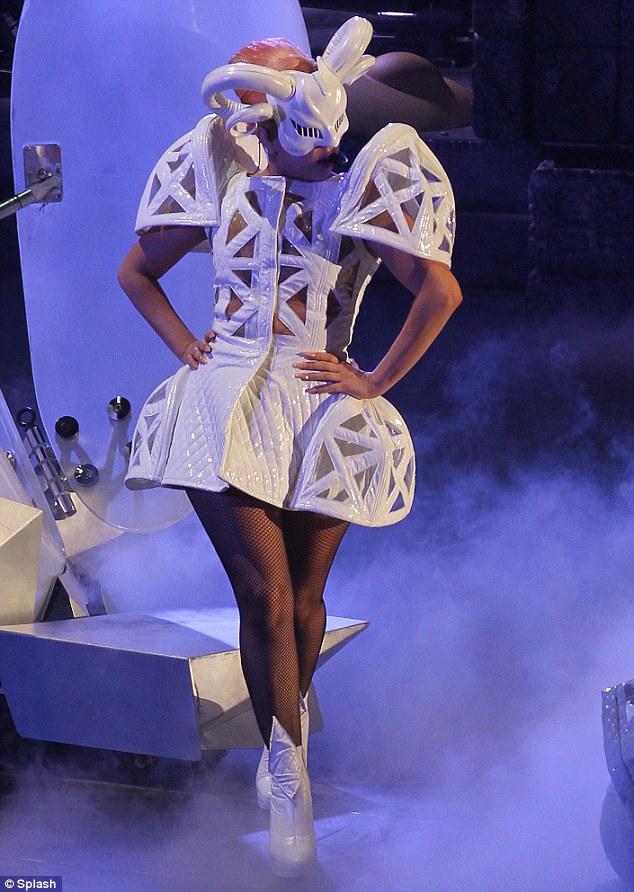 Born This Way: The singer says her boyfriend Taylor Kinney prefers her to be curvier

She added: ‘My weight loss/gain since I was a child has tormented me. No amount of help has ever healed my pain about it. But YOU have.’
Lady Gaga recently said she’s happier than ever with her body, especially because partner Taylor Kinney is a huge fan of her new fuller figure.
Writing on her blog, she said: ‘My boyfriend prefers me curvier.