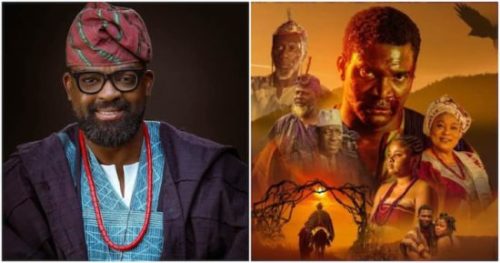 Veteran Nollywood filmmaker and actor Kunle Afolayan recently spoke about his latest movie Anikulapo, which is set to be the third of his Netflix original in the last two years.

Afolayan in a chat with Oke-Hortons Nosa said the movie is a surreal portrayal of the Yoruba culture and beliefs based on the Ifa mythology.

“The backdrop story of this movie is from Ifa, and then we added a bit of Yoruba mythology to it. The film is basically meant to tell help people get to understand more about our culture, our beliefs, and our ways. It will to portray what the Yoruba empire use to be like back in those days governance wise and the lifestyle.”

When Kunle was asked to give an estimated value of what it cost to produce Anikulapo, he said that bringing all of his ideas for the film to life cost him a lot of money.

He further revealed that the entire set the movie was shot on was built from scratch, and after shooting, he intends to turn the place into a film village. Below is an excerpt of Afolayan’s reply: