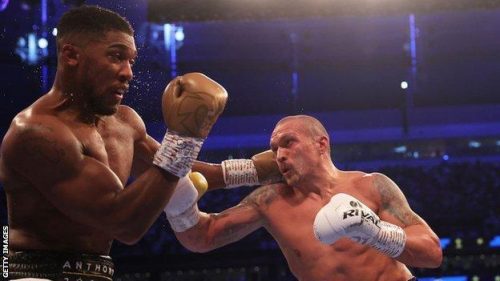 Few hours after losing his World Heavyweight title to Oleksandr Usyk, Anthony Joshua has insisted that he’s ready to bounce back and demand for a rematch.

Joshua was defending his three world titles for the second time since snatching them back from Andy Ruiz Jr two years ago.

The Briton has a rematch clause in his contract with Usyk, and later confirmed he would take it.

“This experience today is invaluable. This will have a massive benefit in the next fight,” said Joshua, pictured with his swollen eye mid-fight

Joshua added: “When I was walking back through the tunnel, I just said to myself, ‘I’m ready to get back to the gym, I’m ready to just put that work in’.

“I just want to get back to the gym, get back on the grind and improve, so when I fight these good guys and see that they are hurt I can capitalise on the opportunity.

“I’m a different kind of animal. I’m not a sulker. This is a blessed opportunity, to be able to fight for the heavyweight title of the world, fight good fighters time and time again and for people to come out.

“I’m not going to be going home and be crying about it, because this is war. It’s a long process. This isn’t just one fight and then I’m done.

“I’m going back to look at way that I can improve. Straight away, I’ve already been watching the fight and thinking ‘I could’ve done that better’.”