Emotions ran high on Saturday as families of those who died in the 21-storey building collapse on Gerrard Road, Ikoyi, Lagos, besieged Lagos Mainland Hospital morgue in the Yaba area of the state to identify corpses of their loved ones. 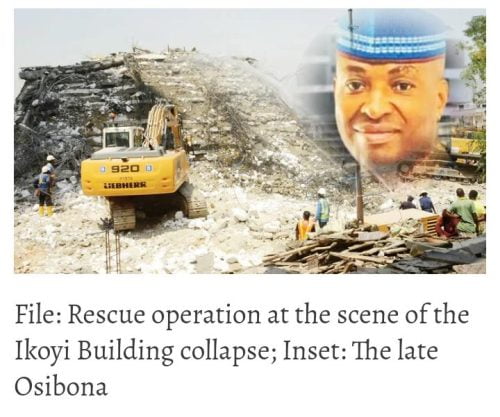 This is just as the wife of Femi Osibona, the developer of the collapsed high-rise, and his family reportedly clashed over access to the deceased’s cash and luxury vehicles in his house on Mosley Road, Ikoyi, barely 24 hours after his body was recovered from the rubble.

One of our correspondents, who visited the mortuary on Saturday afternoon, observed a mix of emotions steeped in tears, grief and anger as families went into the mortuary premises.

However, nine persons survived the incident with three of them treated and discharged from the Lagos Island General Hospital. The six others admitted are Nurudeen Solagbade, Timileyin Oduntan, Waliu Lateef, Ahmed Kinleku (a Benin Republic national), Sunday Monday and Adeniran Mayowa.

Six more survivors located in Lagos hospital
It was said that six more survivors taken to another hospital were discovered on Saturday. Some of the survivors’ near-death experience under the rubble had been reported by Sunday PUNCH.

On Saturday, many affected family members visited Lagos Mainland Hospital morgue to find out if their loved ones were among the corpses recovered so far.

They sat under two canopies mounted on the premises as a female attendant called them one after the other into an office from where they were led to the morgue for identification.

“The most recent picture of the missing person and a photocopy of the identity card of his/her blood relation are required,” the attendant announced. “You will then be called in to identify the body but you have to be strong,” she advised.

Otu’s sister, who declined to give her name, broke down in tears as she came out of the office. Flanked by four relations, she was consoled and led out of the premises.

“I have seen his corpse. They said they would contact us to collect it as soon as the governor gives approval,” she told Sunday PUNCH briefly, fighting back tears.

Shortly after, another bereaved family member surfaced from the office, looking downcast. He held his head in distraught, nodding dejectedly as he walked out of the premises together with his relations.

After a while, a light-complexioned woman in a white gown stormed out of the office, holding a piece of paper containing a female photograph.

“Let’s go,” she yelled, beckoning at a family member who had also stepped out of the room.

“They said we should bring her photograph. We went to a business centre to do a printout containing her picture and brought it only for them to say it has to be a hard copy,” the family member explained to some policemen who approached him to find out what was wrong. “Are we happy to be coming here?” the man fumed.

They returned to the office about 30 minutes later to identify their relation’s corpse. The woman emerged from the office afterwards sobbing as she was led out of the facility.

Also, a middle-aged man donning a blue native dress headed to an office inside the mortuary visibly angry. He initially shunned entreaties when some attendants tried to direct him to “the appropriate section.”

He was eventually led to where he checked his relation’s corpse. Minutes later, he came out with a frown, snapping his fingers. A family member quickly walked up to him and parted him on the back.

“It’s okay. I will be fine,” the bereaved man murmured as they both left the facility in tears.

Meanwhile, a crisis is brewing in the Osibona family as his wife and relations are reportedly fighting over the ownership of his property.

It was gathered that the wife, who flew in from the United States of America following the death of her husband, was denied access to the Ikoyi residence of the late developer by his siblings.

Osibona’s wife and siblings were said to have arrived at his residence with mobile policemen to lay claim to his assets, including luxury vehicles, cash, and other valuable items.

But the late developer’s neighbours were said to have shut them out to avoid being caught up in the crisis.

A reliable source close to the family, who confirmed the clash to one of our correspondents, said though the deceased did not die intestate, his family members fought over his assets.

The source said, “There is big fighting going on. The wife had been mostly abroad. There is a will but once a man dies, there is a problem. Instead of them (the family) to focus on the collapsed building, they are looking at the property (on Mosley Road). They are waiting to gain access (to the apartment); they are still there.”

Giving an update on the tragedy on Saturday, the Lagos State Governor, Babajide Sanwo-Olu, disclosed that 42 bodies had been recovered from the site as of 6pm.

The governor in a statement by his Chief Press Secretary, Gboyega Alaka, also stated that six additional persons rescued from the debris had been traced to another hospital.

He said, “They were taken to the Police Hospital in Falomo for treatment and some of them have been discharged. We have taken the full records of survivors in the incident. And this gives a total of 15 people rescued alive.

“Among the latest survivors are a 38-year-old woman, Glory Samson, Ndajor Ahmed, Yunusa Abubakar, Ajiboye Habib, Jeremiah Samson, and one man identified as Emem. While most of them sustained varying degrees of injury, Samson, 20, is said to be in a coma.”

The governor also said 49 families had filled the missing persons’ register as of Saturday morning, adding that DNA examination was being undertaken on some of the bodies difficult to be identified by their families.

He stated, “There is a sum of money that has been reserved by the state government for succour and to give for befitting burial for those who died in the incident. Families that wish to accept it are being supported for the burial arrangement. Also, survivors in hospitals have been given the financial support to help them settle and cope with challenges of feeding in the aftermath of the incident.”

The All Progressives Congress National Leader, Asiwaju Bola Tinubu, and the Nasarawa State Governor, Abdullahi Sule, also visited the scene of the incident on Saturday in company with Sanwo-Olu.