If You Are Scammed By A Fake Pastor, It Is Your Fault – Mike Bamiloye 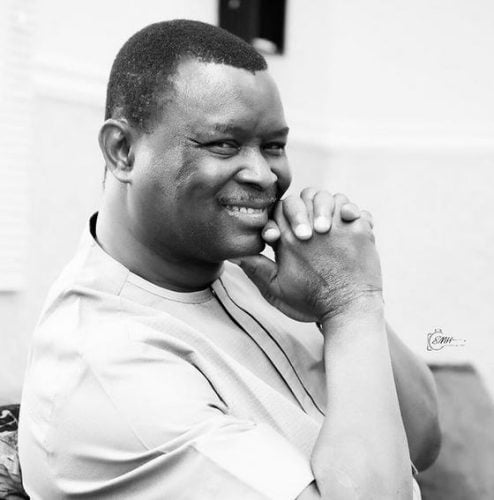 Televangelist and President of Mount Zion Faith Ministries, Pastor Mike Bamiloye has said that if one gets defrauded by a fake pastor, it is  their fault.

He also stated that if one goes to hell because of fake pastors, it is also their fault.

Educating them, the man of God made other cases and said;

“WHY ALL THE SCREAMS?”

“Sir, why are you so worried about Fake Pastors? Why all the fusses? Why all the screams about fake Pastors and Ministers of God? Why are you so surprised? Is it something so strange? Are there no Fake Doctors? Fake Lawyers? Fake Physicians? Fake beauties of Fake Ladies?

“You watch Movies and you cry because somebody died in the movie. Did he die for real? You watch a movie and you become emotional, was it a Reality Show? Fake Tyres. Fake toothpaste. There are big toys that look like human beings and someone once’s got married to his Toy Wife.

“And News carried it celebratedly. THERE WAS A FAKE DISCIPLE OF JESUS CALLED JUDAS ISCARIOT. He followed the Lord for Three and half Years stealing from the purse and ending up Selling his Master for N30,000. Sir, so why are you so worried about Fake Pastors as if they were the First to be Fake in our Society. 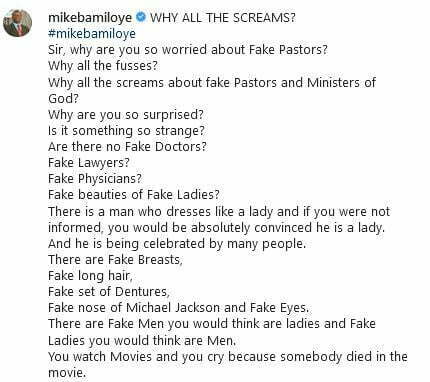 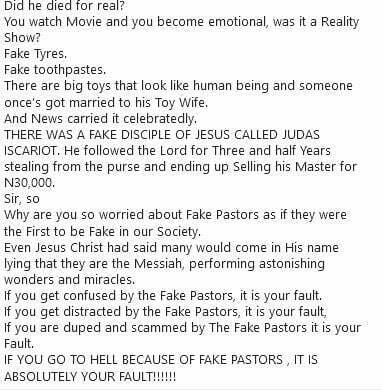