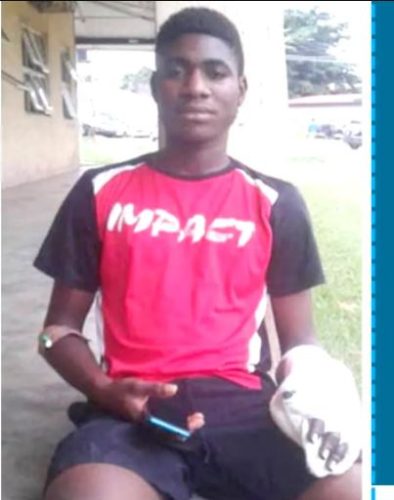 On Tuesday, the 26th day of April 2022, the day started just like any other working day for Kayode Daniel, a 22-year-old only son of a widow, Mrs Kayode Grace.

As an Assistant Supervisor at Chinese company, Yanou Industry Nigeria, Daniel’s daily task includes ensuring that safety measures are complied with in his tailoring section.

Unknown to him, fate was about to play a fast one on him. Immediately Daniel switched on one of the machines to start cutting fabrics, the big blade malfunctioned and left a deep cut on his left wrist.

Narrating how the incident happened, Daniel said: “I work as an assistant supervisor in the tailoring section of the company. My job is to cut out materials for collation and to confirm if they are complete. But on April 26, 2022, while performing my duty, the machine I use to cut materials malfunctioned and cut my left wrist and fingers.

“I was rushed to a nearby hospital. When my mum visited me, we were told that I would have to undergo a hand study before surgery. I was asked to deposit some funds which we did not have. I told my mother to go to the company to request for money. She came back and told me that the company refused her request for assistance.”

Daniel’s mother further told Encounter that the management of the company insisted that the only condition on which they would assist her son financially was for her to sign a document admitting that it was Daniel’s negligence that led to the industrial accident.

Encounter sighted that document which read: “I understand that my son who was injured in the accident in this company was totally due to his negligence of the company’s guidelines which states that a worker should not leave his assigned position to operate a machine if they have not undergone the necessary training, and yet, didn’t listen to the several warnings he received before the incident happened. Due to this fact, I hereby acknowledge that the company does not have any fault in this.”

Because Daniel’s mother refused to sign the document, he was abandoned to his fate by the company as the wound on his wrist continued to deteriorate. Because there was no money, Daniel was taken to a hospital that lacks expertise on the management of such industrial accident. After two days of treatment, he was detained at the hospital until his co-workers contributed funds to offset the N230,000 medical bill demanded by the hospital before he was referred to Igbobi Orthopedic Hospital, Lagos.

Lamenting her frustration over her only son’s predicament, Mrs Kayode said: “On April 26, 2022, someone informed me that my boy had an industrial accident and injured his hand. On getting to the hospital where they rushed him, they said that he had bled so much and there was no doctor around. We waited until 6:30 pm before the doctor showed up. The doctor called me into his office and told me that the hand injury needed a specialist hospital.

“He said they would perform a ‘hand study’ before surgery. After that, he told me he was going to do an X-ray on the hand. After the X-ray, he showed me the damage the machine had done to the hand. He suggested that we go to the Orthopaedic Hospital Igbobi. However, he said before we can go, we have to pay his own bill which was N230,000. I did not have money. I told my son. He suggested that I go to the company to tell them.

“On getting to the company, they said I have to sign one paper. When I read through the paper, I saw that if I signed that paper, it means I have admitted that the accident was due to my son’s negligence. In other words, it means I’m going to pay for the cost of his treatment. So, I declined. But my son’s co-workers contributed money and gave me N300,000. So I settled the first hospital bill of N230,000, after which I was given referral letter to Igbobi.

“On getting to Igbobi, I called the company and they sent a manager. The manager came, looked at my boy and promised that within a week something was going to be done. That was on the 28th. After 28th, I started calling and they said they were going to pay. Three days after, nothing came from them. I cried and begged to no avail.

“I contacted a lawyer who engaged the company’s lawyer. My lawyer told the company’s lawyer that the company should bear the cost of present and future hospital bills, compensation, and give my son a job. The lawyer refused to grant the request. However, on Saturday, May 14, the company’s lawyer came to the hospital. When he saw the condition of my son, he said I should not worry that by Monday morning, (May 16), he would come to pay for the surgery. In fact, the surgery ought to have been done on Friday (May 13), but for lack of money.

“This morning (Monday May 16) when the doctors came, they told me that the damage is very serious and that the hand may be amputated if fund is not made available for the surgery. The doctors said the damage started from the first hospital, where my son was taken to. They said if the boy had been brought to Igbobi within eight hours after the accident, they would have been able to save the hand. According to the doctors, the past two weeks that the surgery was delayed has compounded the situation.

“The hospital is demanding N5 million for the surgery. They asked for N2.5 million at first. The hospital has given us another bill, that is N2.5 million, making it N5 million. This bill does not include feeding, running around and drugs because, at times, the hospital may not have the drugs needed, we will have to get the drugs outside. The doctors have warned me that if the surgery is not done immediately, the damage may spread to the boy’s elbow joint.”

After the outcry of Daniel’s mother, Encounter gathered that the Chinese company later deposited N500,000 for Daniel’s treatment. A source, however, said that the company’s support came rather late, as Daniel’s hand was amputated a day after they released the money.

Following news of the industrial accident, the National Union of Chemical, Footwear, Leather, Rubber and Non-Metallic Products Employees, NUCFLRANMPE, which has been battling for long to unionise the workers of the company to no avail, petitioned the Controller, Ogun State Office, Federal Ministry of Labour and Employment, alleging, among others, unfair and anti-labour activities at the company.

The petition by the National Secretary of NUCFLRANMPE, Joseph Dada, reads: “We have written series of letters proposing to meet with management on unionisation which was flatly refused by the management. The issue was reported to the Ogun State Controller of Labour who invited the management for a meeting since February 2021 but they did not honour the invitation. However, workers in this company have been subjected to work under inhumane and hazardous conditions leading to frequent industrial accidents in the factory.

“Furthermore, a worker who is an assistant supervisor, had an accident in the factory recently, and the management did not take any step to give him good medical care. It was the fellow workers who contributed money to pay the medical bills incurred before the worker was referred to Igbobi Orthopaedic Hospital, Lagos. Currently, the boy is on admission at the expense of the family and fellow workers.

“The activities of this company are inhumane and callous which call for urgent intervention to save the lives of the workers and prevent the company from turning the factory into a concentration camp.”

Annoyed by perceived increasing unfair practices including casualisation of workers, poor remuneration, breach of labour laws, and Employee Compensation Act, ECA, among others, leaders of the Ogun State Chapter of Nigeria Labour Congress, NLC and NUCFLRANMPE, Tuesday, May 17, led aggrieved workers to picket the company.

The picketing exercise which commenced around 8am, crippled the operations of the company throughout Tuesday with workers chanting freedom songs. Among others, the picketers accused the company of inhuman treatment of workers, exposing the workers to hazardous conditions, refusing to enrol the workers in Employee Compensation Scheme, ECS, thereby breaching the Employee Compensation Act, and some unprintable allegations.

Efforts to speak with the management of the company were unsuccessful. One of the management staff told Encounter that he would call back later, but did not as at the time of filing this report.