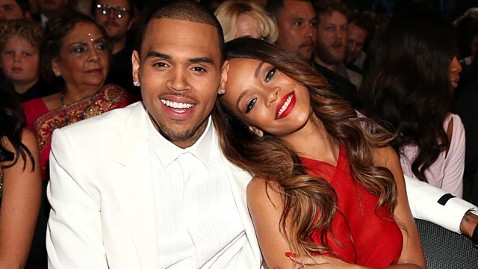 What a difference four years makes.
The most talked about moment of the 55th Grammy Awards took place in the audience as Chris Brown, 23, and Rihanna, 24, were spotted smiling and cuddling.
The two walked the red carpet separately but once inside the Staples Center, Brown and Rihanna got cozy. Rihanna, decked out in a red dress, was photographed leaning her head on Brown’s shoulder with a huge smile. The two lovebirds have come a long way in just four years.
On the eve of the 2009 Grammys, Brown assaulted Rihanna, whose bruised face became a tabloid fixture.

Last Wednesday, Brown appeared in court to face accusations that he violated his probation by submitting false community service records in connection with his sentence for assaulting Rihanna. Rihanna stuck by her man and showed up in court with him.
In a recent interview with Rolling Stone, Rihanna said dating Brown makes her happy and “if it’s a mistake, it’s my mistake.”
In other Grammys-related news, the ongoing feud between Brown and R&B star Frank Ocean took another interesting turn. While Ocean was walking to the stage to collect the award for best urban contemporary album, the entire crowd gave him a standing ovation – except Brown. Brown’s album ‘Fortune’ was nominated in the same category. 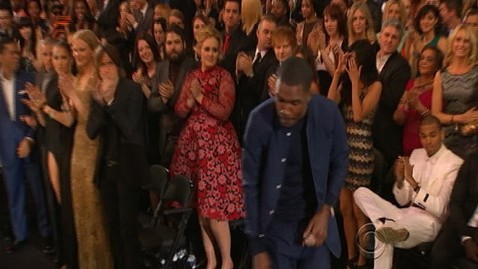 There is still some obvious tensions between the two singers after a reported fight last month.
Witnesses told deputies that Brown punched Ocean during an argument over a parking space outside a West Hollywood, Calif., recording studio Jan. 27, The Associated Press reported.
Ocean took to Twitter after the alleged brawl and tweeted, “got jumped by Chris and a couple guys…”
Earlier this week, Ocean said he would not pursue criminal charges against Brown, who has not commented on the allegations.