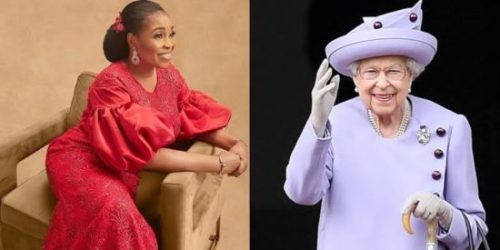 Gospel singer, Tope Alabi is presently mocked and criticized online for releasing a tribute song in honor of the late

“The Queen died peacefully at Balmoral” Buckingham Palace said in a statement.

With this latest development, her eldest son Charles, 73, automatically becomes king of the United Kingdom and the head of state of 14 other realms including Australia, Canada, and New Zealand.

In a bid to pay tribute to her, Gospel singer Tope Alabi released a video of collated photos of the Queen with a composed song in her honor, an act that many of her followers didn’t appreciate.

“When I heard the news I was shocked and sad, though it’s better on the other side, I know it is peaceful on the other side, but we are pained you had to leave us this soon. We don’t want you to leave, we didn’t plan to pay tributes to pay this soon, you love everyone and you are so kind” the lyrics of the tribute song reads in part.