Halima Oniru, the ex- wife of Oba Adetokunbo Tejuoso has filed a lawsuit against the monarch accusing him of threat to life, domestic violence and fraud. 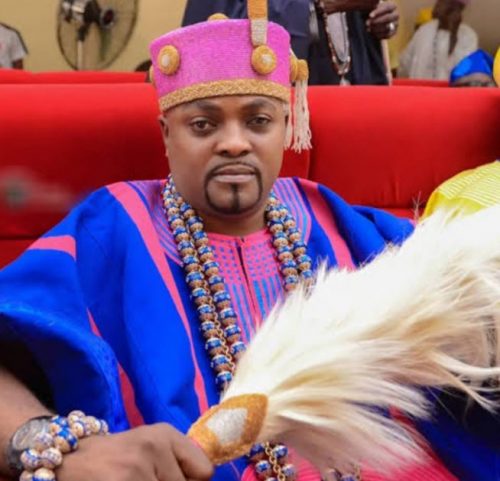 Dailypost learnt that the woman had earlier petitioned the Inspector General of Police through her counsel, J. S Agada & Co., accusing the traditional ruler of fraudulently coming up with many business plans with an intention to swindle her company, Haleems Integrated Services Limited.

On Sunday, Oniru alleged that Oba Tejuoso had borrowed up to N150m from her on the pretence of “pursuing a chieftaincy title in Ogun State.”

She alleged that the monarch had at one time presented to her forged receipts of some of the transactions so as to defraud her of a huge sum of money.

She mentioned to newsmen on Sunday that her estranged husband used to beat her on any slight provocation, adding that he sent her out of her house since March without allowing her to pack her belongings.

“In the guise of doing certain kind of business, he continued to place incessant/continuous demand for monies running into hundreds of millions.

“We finally came together and were co-habiting as husband and wife. In the course of our being together, I got to know about these other sides of his fraudulent and numerous nefarious activities.

“As a result, I confronted him on same and as a result, he started beating and attempted killing me at any slighted opportunity and he finally pushed me out of the house without allowing me to carry any of my belongings from the house. There are pictures of the various degree of injuries inflicted on me by the suspect in the course of beating me and attempting to kill me.

Oniru told newsmen on Sunday that the traditional ruler had threatened to blackmail her releasing her nude pictures on social media.

According to her, Tejuoso had allgedly engaged a blogger to malign her image and drag her children on the social media.

Our correspondent contacted Oba Tejuoso for his reactions to the allegations on Sunday evening.

The Oba, who took his time to address the issue, debunked all allegations, saying the woman lied against him.

The Oba, who confirmed being aware of the petition, said the money he was owing Oniru was not up to N150million.

His words: “On the N150million, we have been dragging this for 2years now. I told her to prove to me where she got the N150million from. Let me be frank with you, there has been money issue between me and Halima. I told her to calculate what she had taken, how much is left and how much I’m going to refund her. She has been running away from that, all she’s saying is that I’m owing her N150milion.

“I got a contract from CCECC to supply sand, I had a site there and Halimat said she has one honourable who can bring money. Let me meet honorable, she did not let allow me to meet him. Eventually, she said she had brought money from the honourable for us to do business. She has sold all the excavator she said I bought for N10million and I gave her a receipt of N15million. Halima has not allowed me to work for one day that I bought those equipment. She sold the excavator, a pay loader, two Howo trucks, yet she said I’m owing her N150million.

“She said I gave her a receipt of N15million, in the first instance, I didn’t even give her the receipt. Halima is just going about causing issues, but Im just looking at her, not because I don’t know what to do, not because I’m guilty, but he who lives in glass house, don’t throw stones. Halima is still begging Olu Itori to beg me. If I want to advise her, I will tell her to leave all this rubbish she’s doing. People are mocking her.”

The monarch delved into the origin of the crisis between them, denying ever hitting the woman.

“I wouldn’t want to say anything negative about her. I never beat Halima, she fell down in my compound inside the gutter and she had bruises on her leg, but she printed that picture to show the police that I was the one that beat her. If that statement is a lie, let the God of heaven crush my life. But if it is not a lie, let God spare my life and anybody that lied, let the wrath of heaven come upon the person.

“Halima would leave my house for Lagos and three days after, she would call me that she’s in Ore or Abuja. I told her she could not leave my house and go wherever she pleased without my consent.

“In November 2020, Halima started shouting where I was leaving before, everybody in the neighborhood could hear her. From that spot, I moved my things out of the house to another place. She ran to Oba Alaafin of Oyo that I sent her out. It was the Alaafin who called me to forgive her. Then she came to Abeokuta and I allowed her into another house I moved to. How on heart did I not allow her to move her things?

“Prior to her petition she left for about four days and came back later. On another occasion, she went away for nine days. She came back and I said she would not come into my house. I changed the padlock of the gate and told my house help not to allow her in. But when I went out one day, the house help allowed her in. I was angry.

“One early morning, she came again, claiming she wanted to take her things. I held her hand trying to pull her out and she started screaming. I knew she wanted to create a scene and I left her. I changed the padlock of the gate again and I sat outside.

“After about 30 minutes, there was a knock at the gate, they said they are police from Ibara division. They said they got a distress call that a woman said her life was in danger.

“The DPO and the CP also spoke with me. Halima drove in her car and I drove the police in mine. By the time we got to the station, Halima had torn her clothes. She told the DPO that I beat her and tore her clothes. I marvelled. She even used a key to draw a mark on her face.

“When she left to write her statement, the DPO told me that the instructions before him was that he should charge me for assault, he advised me to let her pack her things. She was escorted by two policemen.

“When I, Halima and the policemen got home, I sat outside with one of my boys and they packed everything they wanted to pack. Halima removed everything in my house like kitchen cabinets, wardrobes.

“When she left, she wrote petition against me, which was brought by the same Ibara police station to Odeda. I was surprised.

“I tried calling the DPO, but it wasn’t connecting, so we drove down. When we got to Odeda roundabout, the policemen said they wanted to branch at the Police Station at Odeda so they could be aware that they are inviting me to Ibara Police station which I agreed to. When we got to Odeda, they said I should come down so they could talk to the DPO and I followed them. As I was entering the police station, one of the policemen grabbed my phone and said I couldn’t use my phone that I was a suspect.

“I was told to sit behind the counter. The policemen said they have a petition against me and I was told to write a statement. I told them I have to see my lawyer first because I don’t know what the petition was all about. They brought the petition out without allowing me to read it. I told them I can’t write anything without talking to my lawyer. They said I was speaking too much grammar and they will disgrace me. I was told to remove my clothes. As I was removing my clothes, Halima was taking my pictures with her phone and she sent them to bloggers which is not right under the law,” the Oba submitted.