The son of a landlord, Samuel Omojola has been arrested in Akure for killing a tenant. 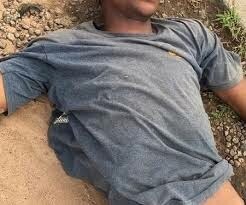 The deceased identified as Kehinde was hit with a plank on the head by the suspect during an argument over payment of house rent in Oke-Jebu area of Akure metropolis.

The deceased was said to have entered into an argument with the landlord but the son while defending his father hit the deceased on the head with a plank.

An eyewitness said that the landlord accused the deceased of always insulting him whenever he requested that he should settle his house rent.

But on the said, according to the eyewitness, an argument ensued again and degenerated into a hot argument between the duo.

The source said that ”the insult however did not go down well with the landlord on this particular day as he put a call across to one of his sons who immediately arrived at the scene.

“But instead of inquiring about what transpired between his father and the deceased, the suspect just took a plank and hit the tenant on the head.

“The tenant fell on the floor and was bleeding profusely. Their neighbours quickly rushed him to the hospital where he was admitted and died two days after.

Vanguard gathered that immediately the death of the victim filtered through town, some of his family members and friends mobilized to the landlord’s house and attempted setting it ablaze.

The timely intervention of homicides detectives from Ijapo police station prevented them from razing down the building.

Report has it that the DPO in ljapo Police station drafted a team of detectives to the scene of the crime where the suspect was apprehended.

A top police officer told Vanguard that policemen assisted the concerned neighbors to rush the victim to the hospital, but he later died.

The police officer said that the case would be transferred to the State Criminal Investigation and Intelligence Department SCIID for further investigation.

The command’s image maker, Olufunmilayo Odunlami could not be reached for comment.