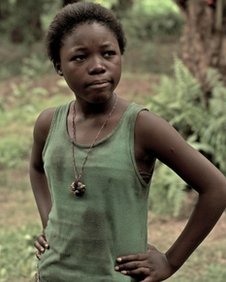 The teenage star of an Oscar-nominated film about child soldiers in Africa has been granted a visa that will enable her to attend the Academy Awards.

Rachel Mwanza, from the Democratic Republic of Congo, plays the lead role in War Witch, the Canadian submission in the foreign language film category.
The 16-year-old was cast by Montreal film-maker Kim Nguyen despite having no previous acting experience.
She went on to be named best actress at the Berlin and Tribeca Film Festivals.
Nguyen, whose hard-hitting film also goes under its French title Rebelle, said his young star’s story was “truly a Cinderella tale”.
“Abandoned by her family and living on the streets as a child, her life has been transformed by the making of the film,” he said in a statement.
“To have her journey end on the red carpet is beyond anything she could have dreamed of.”
According to the Los Angeles Times, the makers of War Witch are trying to arrange a meeting between Mwanza and her “idol”, singer Beyonce Knowles.
“That’s all she talks about,” producer Marie-Claude Poulin told the newspaper. “The only English words she knows are Beyonce and Rihanna songs.”
With only three days to go before this year’s ceremony, another Oscar contender has written about being briefly detained while trying to enter the US on Tuesday.
Emad Burnat, the Palestinian co-director of Oscar-nominated documentary 5 Broken Cameras, said he was held with his wife and son by immigration officials at Los Angeles International Airport for “about an hour”.
Oscar-winning film-maker Michael Moore, who had been expecting Mr Burnat at a dinner for this year’s best documentary nominees, expressed his dismay in a blog posting that claimed his friend had been “threatened with deportation”.
In a statement, Mr Burnat said the experience, while “unpleasant”, was “a daily occurrence for Palestinians, every single day, throughout the West Bank”.