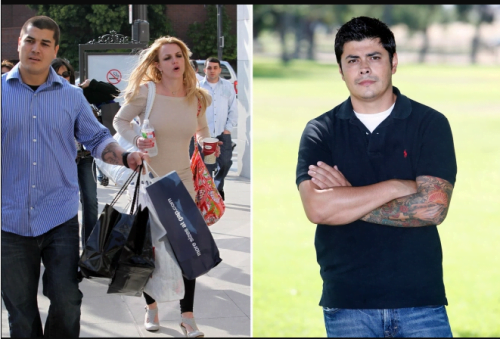 American singer, Britney Spears’ former bodyguard has made claims that she was given a cocktail of powerful prescription drugs once a week when he worked for her in 2010 amid her ongoing fight to end her controversial conservatorship with her dad.

Ex-cop, Fernando Flores alleged the 39-year-old pop superstar would be given anti-psychotic medications which would make her ‘go from sane to talking about parallel universes’.

Flores, 40, who worked for the singer from February to July 2010, claimed her phone was monitored and she was never allowed to leave the house alone under the rules of her conservatorship.

The former police officer, who quit his job after eight months, told The Sun that a woman would visit Britney at her home once a week on a Friday to give her the medication.

Flores made the claims days after Spears secured a major win in her conservatorship battle when a judge granted her the right to appoint her own lawyer, after she told the court she wants her father charged with conservatorship abuse.

‘I’d explain [to Britney] what everything was — three anti-psychotic medications and birth control pills,’ Flores said.

‘She’d go from sane to talking about parallel universes.’

Fernando also told how Britney would be left in tears after being called multiple times a day by her father and conservator Jamie Spears, adding that visitors to her mansion in LA would have their bags searched.

‘Jamie would call three or four times a day to check what was going on,’ he said. ‘If she wanted something, she had to ask his permission.

‘She spent her days watching TV, or working out. When down, she’d cry listening to [James Brown’s] It’s A Man’s World.’

Britney Spears has been under the conservatorship since 2008, when concerns over her mental health prompted her father to petition the court for legal authority over his daughter’s life.