Bobrisky Sends Important Message To His Haters, Days After Being Exposed 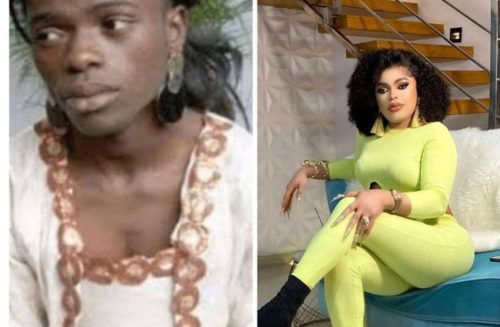 Popular crossdresser, Idris Okuneye popularly known as Bobrisky has sent an important message to his trolls and haters.

The crossdresser was mercilessly dragged online after a video made rounds of his original backside.

The dramatic Bobrisky shared a video on his verified Instagram page, flaunting his heavily acquired backside. He accompanied the video with a message about how he nearly died of pain during liposuction.

He wrote: Pls allow me to shake it, Biko
It’s not easy
I almost d*ed of pain during my journey
Liposuction is very painful”.

Following this, a video that emerged online captured Bobrisky’s backside, far from the usual ones on his social media page. The new video that showed his unedited backside was taken by a fan during his tour.

Reacting to the viral video and the backlash he has been receiving for living a ‘fake’ life, Bobrisky sent an important message to them.

Bobrisky revealed that it was too late for him to reverse his surgeries.

The crossdresser described himself as a bad bitch that has invested so much on his body.

He opined that nothing is hard for him to achieve in as much as his bank account keeps increasing.

For him, he chooses who he wants to be and he is happy and brave about it.

Bobrisky added that the online community’s trolls and insults are too late as he has done multiple surgeries which can never be reversed.

“I’m that bad bitch that has invested so much on my body. Nothing is hard to achieve in as much ur bank account is smiling, lol, I choose who I wanna be and I’m happy an brave to go for it. Your trolls or insults is too late sad and it cannot reverse all my surgeries. I took d DICK now I’m Bobrisky