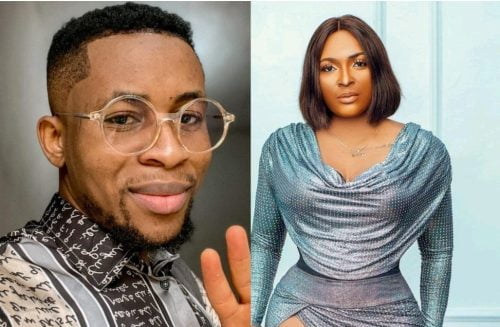 Blessing CEO took to her now deactivated Instagram page to meddle into the issue of domestic violence that occurred between IVD and his late wife, Bimbo.

Bimbo passed away on Saturday 15th October after she burnt down their Lagos mansion following series of domestic violence with her husband, IVD.

Her elder sister, Mama Jazz took to social media to announce her demise. She also called out IVD for killing Bimbo.

According to Buchi, Blessing CEO is not a relationship expert nor therapist so she has no business involving herself in the IVD’s saga.

He also said it seems Blessing CEO misses jail because all her clout chasing could land her in trouble and send her to jail.

He wrote: “Blessing CEO is making mockery of what it means to be a therapist. She’s taking the role of a lawyer. In her words: “I’m stepping into this case as the official relationship therapist of IVD.” Stepping into what? I pray she doesn’t get into trouble. Seems like she misses jail.

“She’s not a therapist and she’s not abiding to any of psychotherapy, counseling or coaching. If you’ve ever had professional therapethicsy, you’ll know that she is self-styled and badly so. Therapy isn’t having a relationship page where you post people’s issues. No.

“In sane climes, she would definitely be shut off by regulatory bodies. We don’t have any sense of regulation with therapy in Nigeria. IVD doesn’t even know his right. She shouldn’t be defending him. Gosh. It makes it even more suspicious. Get a lawyer!

“I don’t know what happened between Bimbo and IVD. It seemed like a marriage with mutually toxic partners, however, social media is not court of law. The case is dicey, because she’s dead. Blessing should tread carefully. The law is not emotional.

“This is a whole case of alleged killing as a result of domestic violence. It’s not some civil case. These cases can be complex. Blessing CEO doesn’t have friends? Hmm! Even her grandmother, Kemi, would do a bit better. Even if she has evidence, she can ruin the case. Advise her.