Biden receives communion at Mass at St. Patrick’s Church in Rome after saying Pope Francis told him he could continue to take the holy sacrament. 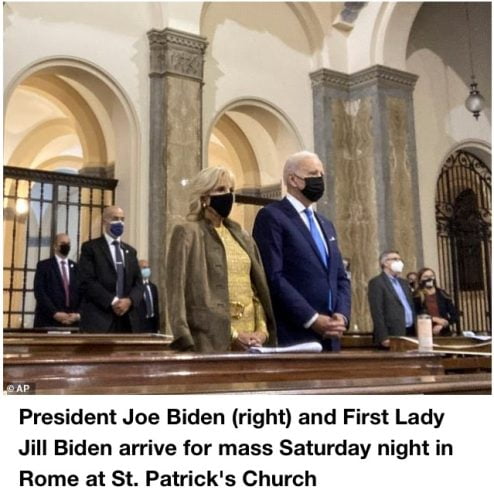 Joe Biden took communion when he attended mass at St. Patrick’s Church in Rome on Saturday night, the day after the president said Pope Francis told him he could continue to take the Holy sacrament.

First lady Jill Biden accompanied him to the religious service.

The English-speaking church is the main place of worship for the American Catholic community in Rome and is located near the U.S. Embassy.

Speaker Nancy Pelosi attended mass there earlier this month when she was in Rome for a meeting of legislative leaders of G20 nations.

Biden, the nation’s second Catholic president, stopped at the church after his first day of meetings at the G20 summit.

He and the first lady are scheduled to attend a formal gala for the leaders of the world’s biggest economies later Friday evening.

While Biden regularly receives Communion in his home dioceses in Washington and Delaware, it was significant that he also received Communion in Rome.

About 30 people were at the Mass, and security guards ringed the aisles. The Bidens sat in the last row that had been roped off as ‘reserved.’

Mass was celebrated by the Rev. Joe Ciccone and two concelebrating priests. Biden waved to two women in the rows in front of him as he arrived with Jill by his side. No special announcement was made at the start of Mass.

The president put U.S. currency in the collection basket.

The president, a devout Catholic, regularly attends Mass in Washington or near his home in Wilmington, Delaware.

He carries rosary beads that belonged to his deceased son Beau and he keeps a photo of himself and the Pope behind his desk in the Oval Office in the first row of pictures next to ones with his family.

Biden revealed on Friday that Pope Francis told him he’s a ‘good Catholic’ and that the two men did not discuss the controverial issue of abortion during their 75-minute sit down behind the closed doors of the Vatican.

He also said the pope told him to keep receiving communion.

‘We just talked about the fact he was happy that I was a good Catholic and I should keep receiving communion,’ Biden said after the meeting.

Biden met with the pontiff amid pressure from conservative Catholics in the United States about his abortion stance.

The U.S. Conference of Bishops is weighing whether to admonish Catholic politicians like Biden and Pelosi, who support a woman’s right to an abortion – which Catholics consider a sin – yet also take Holy Communion at mass.

Biden said he did not take communion Friday. Asked whether he and Pope Francis discussed the U.S. Conference of Bishops, the president replied that’s a ‘private conversation.’

He also said that he and the pontiff exchanged prayers for one another. The president said he prayed for ‘peace.’

And he revealed Pope Francis blessed his son Beau’s rosary beads that he wears around his wrist. Beau Biden died in 2015 from brain cancer. 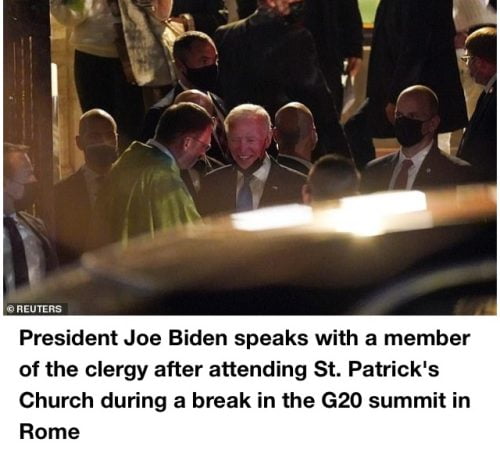 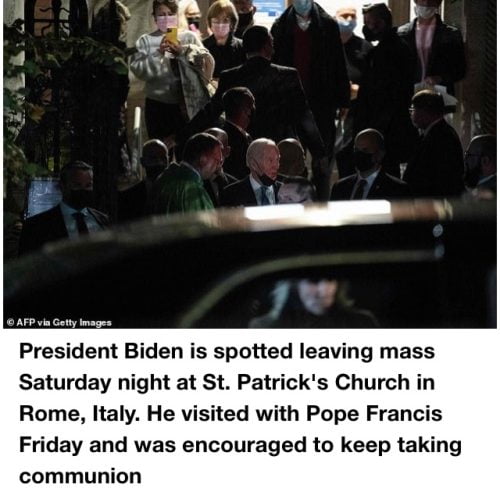