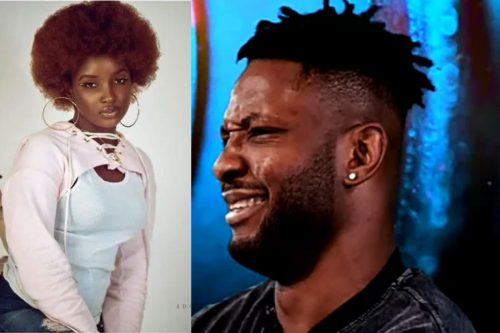 2021 Big Brother Naija housemate, Saskay has slammed housemate, Cross for shooting his shots at her when he knows his financial muscle is light and week.

Saskay who lamented bitterly over how none of the guys has shown interest in her in the house was having a conversation with Cross and he opened up on his desire to have a girlfriend.

Maria and Yousef were also privy to the conversation and Maria had said that she has a young sister who is more beautiful than her and lives in Manchester, UK.

Cross told Maria to hook him with her sister because he would love to date her sister and Saskay hurriedly interrupted saying;

“You don’t have money and you are looking for a girlfriend.”

Meanwhile, housemate, Liquorose has reacted to her nomination by her fellow housemates as the wild card in the show.

As you may already know, in this year’s edition, of the BBNaija show, Big Brother added two housemates to the usual 20 housemates and they referred to these extra housemates as the wildcards and they will play the game and vie for the ultimate prize after a week, housemates are not able to identify the wild cards in the show although fans will know in the course of the show.

READ ALSO: #BBNaija 2021: I Bought Three Vibrators With Me To The House – Housemate Saskay

Almost all the housemates picked Liquorose as the housemate and when she was asked by the host, Ebuka Obi Uchendu on Sunday why she thinks her fellow housemates nominated her as the wild card, in what was supposed to be the first eviction show, Liquorose disclosed that she thinks it is because of her huge followership as she has over 800 thousand followers on Instagram before joining the show.