The two housemates were revealed by Big Brother as the wild cards of the show. 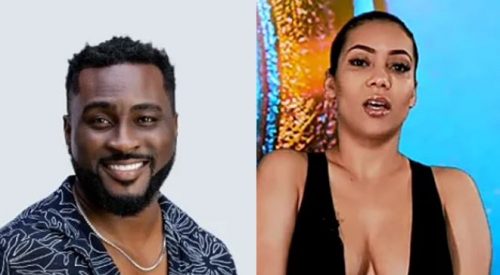 Fans of Big Brother Shine Ya Eyes have been left in shock after it was revealed that Maria and Pere are the Wildcards of the season.

They were revealed during the special Diary Session on Thursday, the day five of the show.

Wildcards are fake housemates placed by Big Brother in the house to add a twist to the show. There are also other things to know about the BBNaija Wildcard twist.

During Maria’s session, Biggie revealed that she has been chosen as a Wildcard of the season and asked her how she felt about playing her role.

Maria revealed that she felt bad for pretending to the housemates.

She said, “I don’t really know how well I’m playing it but it’s killing me. I’m not gonna lie.”

“It’s killing me because they are really loving people and I’m not just saying it, they really are.

“It’s just like lying and lying. I think I’m doing a great job though I don’t feel proud of myself.”

Big Brother asked Maria to predict who the other Wildcard is and surprisingly, she mentioned Pere.

During Pere’s session, Big Brother also asked him how he has been able to play his role as a Wildcard.

When asked to predict who the other Wildcard is, Pere mentioned that it could either be Maria or Nini.

It appears that the real action has begun in the BBNaija house, as housemates have to correctly predict the Wildcards by Sunday.

If housemates are able to correctly identify the Wildcards among them, Maria and Pere will be evicted.

However, if the housemates do not correctly identify them, the duo will have to remain in the show and compete for the grand prize worth N90 million.