The defense team in the alleged sexual assault trial of Nollywood actor, Olanrewaju James Omiyinka a.k.a. Baba Ijesha has challenged a confessional statement purportedly written by a police officer for the defendant upon his arrest in April this year. 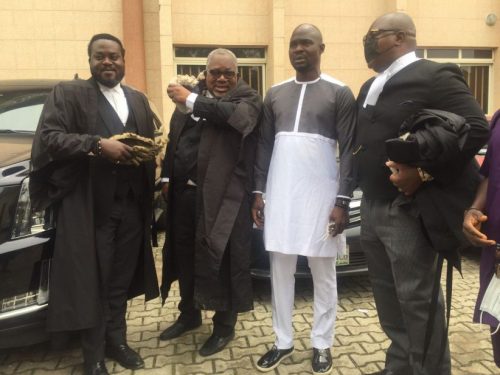 Senior Advocate of Nigeria, Babatunde Ogala made the assertion on Friday, before Justice Oluwatoyin Taiwo of the Lagos State Sexual Offences Court in Ikeja.

He has pleaded not guilty to the six-count charge.

During the evidence of the prosecution’s fifth witness, Assistant Superintendent of Police, Kazeem Wahab said he took over the case from a previous team of one ASP Nuruddeen Musa and Inspector Blessing Nwoko after the complainant, comedienne, Damilola Adekoya, aka Princess, had alleged that the defendant had a close relationship with them.

The police witness who is from the State Criminal Investigative Department, Yaba also said the case file was transferred from the Sabo Police Station where the complaint was initially made.

He sought to tender the statements of Princess who is the foster mother of the minor, as well as that of the victim and the defendant.

But, Mr Ogala objected to the admissibility of one of Baba Ijesha’s police statements, noting it was made under duress, after he had allegedly been beaten up and humiliated by Princess and her cohorts.

The defense counsel also noted that a police officer wrote the statement but that it had no name or signature on it.

“The statement is confessional because the defendant is said to have claimed he molested and harassed Princess’s daughter. The name and date are ostensibly omitted on the statement, so no one takes responsibility, and so that it will be attributed to the defendant.”

The State prosecutor, Yusuf Sule then withdrew the statement, and the court admitted as exhibits, the other two statements written by the defendant.

The witness also told the court that he investigated allegations that the defendant sexually molested another minor in Ada, Ikorodu, who had been presented to the police by Princess. At this, Mr Ogala referred to the complainant as, “chief investigator”.

“We went there with a brother of the defendant, as he was already in detention and we didn’t want to risk taking him along as he could be hijacked from us. The landlord confirmed that Baba Ijesha lives there, contrary to his denial.”

The witness also revealed during cross examination that the landlord didn’t write his statement on the matter at the police station but around his residence.

Further hearing was adjourned till Friday, November 12, for the prosecution to present more witnesses.